WASHINGTON — He toured with The Who, played with Bruce Springsteen, earned raves from Bono and was there the night John Lennon was murdered.

So after his wild “American Ride,” how does singer/songwriter Willie Nile sum up his career?

Next week, Nile comes to Hamilton Live in Washington, D.C., for a live set on Saturday, April 8.

“I’m looking forward to the show,” Nile said. “We played The Hamilton last year. It’s a beautiful venue and a great stage and we rocked it up. It was a good time. We’re looking forward to doing that again. … Guaranteed, if you have socks on when you’re leaving the building, we’ll give you your money back, meaning we’ll knock your socks off. … Take an extra pair of socks, ’cause you’ll need it on the way out.”

Not only will you hear original songs recorded by Nile over the past 40 years, you’ll also hear select tracks from his Bob Dylan cover album “Positively Bob: Willie Nile Sings Bob Dylan,” due out June 23. The idea was inspired by a celebration of Dylan’s 75th birthday last May at City Winery in New York.

“Bob’s the Shakespeare of rock ‘n’ roll,” Nile said. “They called and asked if I’d sing four songs of Bob’s. … I looked late one night through all of his songs and I thought I’ll only do them if I think I can have fun with them or bring something to it. I found some, ‘A Hard Rain’s A-Gonna Fall,’ ‘Rainy Day Women,’ and a few others. It was so much fun singing them live and rockin’ them up a bit. It just was a ball.”

Particularly catchy is Nile’s cover of “Blowin’ in the Wind,” performed upbeat like The Ramones.

“It’s kind of like ‘I Wanna Be Sedated’ meets Bob Dylan on a back street in the East Village,” Nile said.

He recorded his self-titled debut album in 1980, which earned him a spot touring with The Who.

“Someone from the record company said, ‘Pete Townshend is a big fan of your record,’ and I said, ‘That’s nice,’ but I thought to myself, ‘Yeah, sure he is,'” Nile said. “When we were playing in Los Angeles, the first time I ever toured with a band … Freddie Mercury came out that night … and [The Who’s] management came to see us play. … [Their manager] said, ‘Do you wanna open the tour?’ They actually kicked some band off the tour, put me on it and we toured across the U.S. with The Who!”

It was a dream come true for Nile, who had worshipped The Who after seeing them play in Buffalo.

“I never even in my wildest dreams imagined anything like that,” Nile said. “The record company didn’t want to support it: ‘You’ll get booed. Nobody wants to see an opening act with The Who.’ I said, “That may be the case, but boo or not, I can’t turn this down. As a fan, I did it to see The Who play close up.”

Turns out, Nile wasn’t booed off stage. In fact, The Who legends were welcoming to the rising talent.

“They couldn’t have been nicer to us, from the management on down, Pete [Townshend], Roger [Daltrey], John [Entwistle], Kenney [Jones],” Nile said. “Every night was an arena and the fans were wild! I remember we were in Dallas, it was July Fourth, and somebody shot a rocket across, some kind of a firework went flying while we’re on stage! It was a riot. I learned how to talk to 20,000 people: You just talk slow and say Roger Daltrey and Pete’s name a few times and you’re good to go.”

After the summer tour wrapped in 1980, Nile found himself a part of another piece of rock history, only a much more tragic one. While recording his second album “Golden Dawn” (1981) for Arista Records, he was in the same New York recording studio as John Lennon the night he was killed.

“I was in Studio A and John was in the mix room upstairs with Yoko,” Nile recalled. “We’re listening back to a take and [co-producer Thom Panunzio] comes in and says, ‘Somebody just shot John!’ … The phone started ringing off the hook. David Geffen called [and] said, ‘John’s there right? Yoko’s friend just said he’s on the way to the hospital and had been shot! But he’s there recording right?!?’ And [the secretary] said, ‘Well, no, he left about 15 minutes ago.’ It was so, so, so terrible. We were all crying.”

For years, Nile carried “what if” regrets after the fateful night the world lost John Lennon.

Instead, closure came 12 years later when he was asked to open for Ringo Starr & His All-Starr Band.

“The last night of the tour, we’re in Saratoga, New York,” Nile said. “The last song is ‘Photograph.’ He comes off stage and he sees me 30-40 feet away and makes a beeline over to me. He says, ‘Willie, I just wanted to say thank you,’ shook my hand, it was old-school rock ‘n’ roll of him to do that. When he hugged me, he was covered in sweat, and I thought, ‘Beatles sweat! I’m covered in Beatles sweat!'”

He could have never imagined what happened next.

“He said to me, ‘You wanna come on and sing ‘(I Get By) With a Little Help From My Friends’ … a song John wrote for Ringo,” Nile said in a moment of awestruck nostalgia. “When I was singing on stage that night, 12 years later, 1992, on mic with Nils Lofgren, I couldn’t help but think back 12 years to the [tragic night in Manhattan], because this was a John song! I’ll miss him all my life, as will most of us.”

In addition to Ringo Starr and The Who, Nile has also played with Bruce Springsteen’s E Street Band.

“I met Bruce in the early ’90s,” Nile said. “I knew his wife Patti from years earlier playing on the Jersey Shore when she was singing background for Southside Johnny. She said, ‘We love your new record! We work out to it in the morning!’ … So we met a couple days later and we’ve been friends ever since.”

Fans will be thrilled to hear that The Boss is down to earth.

“He’s just a decent guy,” Nile said. “If you knew him in day-to-day life, he’s everything you’d hope he’d be. He’s a regular guy, a good guy with big dreams and a big, giving heart. He doesn’t have to do any more shows; he does it because he loves the music, it means something to him and he loves giving to the audience. The guy knows how to throw a party, let’s put it that way! … You can hang and have a drink with Bruce at two in the morning like you’re talking with anybody, yet it’s Bruce Springsteen.”

Through it all, Nile continues to put out records with “Streets Of New York,” called “a platter for the ages” by Uncut; “The Innocent Ones,” making Rolling Stone’s Top 10 Best Under-The-Radar Albums of 2011; and “American Ride,” voted 2013 Album of the Year by Twangville Magazine. It was hailed by Bono as “one of the great guides to unraveling the mystery that is the troubled beauty of America.”

“When I saw that, I was sitting at my desk,” Nile said. “I opened up the email and I see it’s from Bono and I first of all went, ‘What? From Bono?’ Then I look at the quote. He’s a poet. Another good guy. He takes a lot of heat for all the work he does in Africa, but I tell people he’s raised billions of dollars for AIDS. … If you save one life, that’s worth it! He’s a great guy and a poet, too. Gave me a great quote!”

In November 2014, The New Yorker called Nile “one of the most brilliant singer-songwriters of the past thirty years,” while Uncut Magazine called him “the unofficial poet laureate of New York City.”

What does Nile make of all this critical acclaim?

“People have no taste, what’re ya gonna do?” Nile joked with his signature self-deprecating humor. “What’s that great Groucho Marx line? I don’t wanna join any club that would have me as a member.”

Fittingly, Nile wore a Groucho jacket to WTOP, one of many stage jackets designed by his girlfriend.

“I’ve got like a half a dozen of these with different characters,” Nile said. “This one has the Marx Brothers on the back, I’ve got one with Charlie Chaplin on the back, Lou Reed, John Lee Hooker.”

Which brings us full circle to Nile’s quote, “Rock ‘n’ roll is a Marx Brothers movie you can dance to.” That’s the tagline for an upcoming Austrian documentary on Nile: “One Guitar: The Willie Nile Story.”

“I’ve been blessed,” Nile said. “My father’s advice: Do the best you can, treat people good and leave the rest in God’s hands. … I’m lucky. I worked hard, I never gave up, I persevered. … There’s something to be said for following your dreams. It’s not always easy, but these days it’s rockin’. I’m rollin’.”

Click here for more on Willie Nile’s show at Hamilton Live on April 8. Listen below for the full conversation: 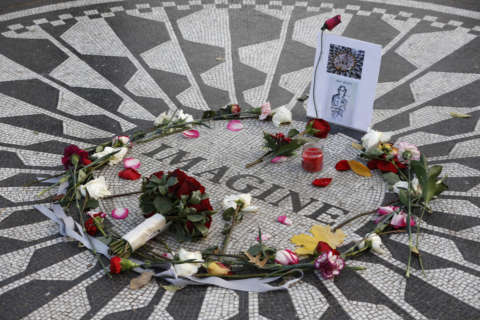