Camping with a purpose: Why Bowie State students went west

The 1,800-mile journey was made possible through a grant from the American Association of Geographers, but there was a bigger purpose behind it.
Listen now to WTOP News WTOP.com | Alexa | Google Home | WTOP App | 103.5 FM

A group of Bowie State University students just got back from a 10-day trek through five national parks in the Rocky Mountains and the Southwest.

The 1,800-mile journey was made possible through a grant from the American Association of Geographers, but there was a bigger purpose behind it.

“Minorities, specifically African-Americans, don’t get these opportunities,” said Sumanth Reddy, a geography professor at Bowie State. In fact, there can be a sense that those sorts of opportunities aren’t for them.

“Somewhere between 2 and less than 5% of African-Americans visit the national parks,” said Reddy. “In the psyche of African-Americans, it’s set in that they were not welcome, because that was the true story when it comes to history. Now they’re welcome, but you don’t have that exposure, you don’t have your parents or your friends doing it so you just don’t think about it.

“If someone hasn’t shown you how to do some of these things, you’re less likely to partake in them,” he added. Never mind the fact that “many African-Americans live in urban areas and a lot of these national parks are a little bit of a distance from here.”

Reddy himself was first exposed to the national park system when he was in college, but he admits he didn’t go to an HBCU and was the only non-white student on the trip. The Bowie State group didn’t encounter too many minorities while traveling out west either. 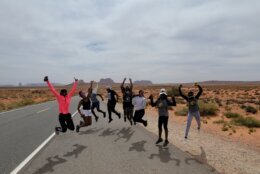 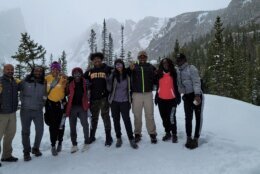 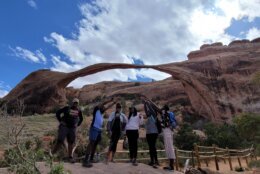 “Probably a handful, I can probably literally count on my fingers,” said Malaika Dixon, one of students selected to go on the trip. “It was really weird. It was like we were the only ones there.”

So why did she go?

“I took the trip just to go outside of my boundaries,” said Dixon. “I thought it would be important for me to go and experience things that I’ve never experienced and push myself to the limit.”

She saw America’s Four Corners and the Grand Canyon, as well as Rocky Mountain National Park, which was definitely her favorite. “It snowed. It was just beautiful,” she said.

If Reddy’s goal was to increase interest in America’s west and the great outdoors, at least on the micro level, it appeared to work.

“Since I’ve posted my pictures on Instagram and different things like that,” she said, her friends have been asking her: “‘How did you go there? Are they doing it again?'”

“They want to go there now that they’ve seen these pictures of these beautiful places and seen that people like them are doing it,” she said.

“Representation matters,” added Reddy. “If people don’t see similar people doing some of these activities, they’ll think it’s not for you.

“We need to change that narrative, and the best way to do that is expose students early on, preferably before college but even college, it’s never too late,” he added. “Our national parks, it’s one of the best treasures in America. It’s so amazing just to be out in these parks.”