‘Embracing its history’: Watergate Hotel trades on its claim to fame

Fifty years after the scandal that put it on the map, the Watergate Hotel embraces its history, right down to its phone number.
Listen now to WTOP News WTOP.com | Alexa | Google Home | WTOP App | 103.5 FM

A half-century ago Friday, the break-in at the Democratic National Committee offices at the Watergate complex in D.C.’s Foggy Bottom led to an investigation that gripped the country for two years and led to the U.S.’ only presidential resignation. This week, WTOP’s Rick Massimo is talking with experts about how the entire affair has affected American politics, history and even the language ever since.

The break-in at the Watergate complex that eventually brought down Richard Nixon’s presidency happened on June 17 — or 6/17 — 1972. The Watergate Hotel’s phone number is 844-617-1972; the recorded voice that answers greets callers with “There’s no need to break in,” and the lettering on the pencils in the rooms reads: “I stole this from the Watergate Hotel.”

So, it’s not like the place is running from its infamous claim to fame. Quite the opposite, marketing director Ali Le told WTOP: “It’s embracing its history, now more than ever.”

The Watergate started making history before the opening of the complex, which rolled out in stages over the late ’60s and early ’70s, growing to five buildings of offices, apartments and the hotel itself.

The European-style architecture proposed in 1959, with its concrete curves and points, was at odds with much of the image of Washington at the time, leading one critic to claim it was “as appropriate as a strip dancer at your grandmother’s funeral.”

The name came from several places — the area is near the literal water gate near the Jefferson Memorial, and the name “Watergate” was used for the concrete steps (which are still there) leading down the west side of the Lincoln Memorial.

From about 1935 to 1966, the steps functioned as outdoor seating for concerts held on a floating stage in front of the steps. The Water Gate Inn was a restaurant that operated at 27th and F streets in Northwest D.C. from 1942 to 1966.

It didn’t take long for the apartment complex to attract a bipartisan batch of dignitaries, including senators and administration officials, but not for nothing was a 1969 Washington Post story headlined “Watergate, Where Republicans Gather.”

Stans later pleaded guilty in connection with financing the Watergate break-in and was fined $5,000; Mitchell, the face of the “law and order” Nixon administration, was convicted of perjury, obstruction of justice and conspiracy, and served 19 months in prison.

Rose Mary Woods, Nixon’s personal secretary, also lived in the Watergate. She was briefly notorious for the preposterous “Rose Mary Stretch,” in which she was put in the position of contorting herself behind her desk in a lame attempt to demonstrate how the 18 1/2-minute erasure in a crucial Oval Office recording could have been accidental. 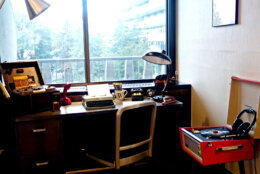 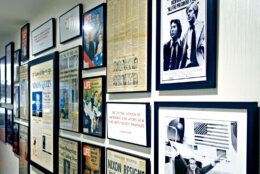 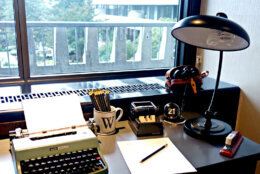 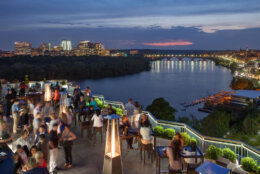 The infamous events at the Watergate have been a selling point for the hotel ever since. The hotel portion of the complex closed and sat dormant for seven years, during which the building’s boat-like appearance inspired the nickname “Shipwreck on the Potomac.” It reopened in 2016 after a $125 million renovation.

Le said the point of the renovation was to spruce up the hotel while retaining its unique design.

“We wanted to preserve a lot of the original design of the Watergate and all the curves. And if you walk through the lobby, you can still see the way that the building itself is kind of curved in a certain way.”

And the former Room 214 — the command center from which “Plumbers” Howard Hunt and G. Gordon Liddy stood on the balcony and directed the break-in of the Democratic National Committee using two-way radios and binoculars — has been restored to its early-1970s state, with period newspapers and other memorabilia part of the décor.

For the 50th anniversary on Friday, the hotel will feature tours led by Paul Leeper and John Barrett, the two D.C. police officers who arrested the Watergate burglars; cocktails themed to the miniseries “Gaslit,” about Mitchell’s wife, Martha, a key source of Watergate information early in the scandal; and a chance to tour the Scandal Room.

Minors among those killed, injured in string of DC shootings

Back in the Day | Local News | Washington, DC News