On Monday, congressional officials approved a plan to put temporary fencing back around the Capitol ahead of the rally.
Listen now to WTOP News WTOP.com | Alexa | Google Home | WTOP App | 103.5 FM

It has been more than eight months since a pro-Trump mob stormed the U.S. Capitol in an effort to stop the certification of President Biden’s 2020 election victory. Since then, federal authorities have arrested hundreds of people in connection with the Jan. 6 insurrection.

A rally will be held Saturday near the site of that attack in support of those charged.

The Capitol Police said in a statement that officials are “aware of concerning online chatter” about the demonstration. While it is still unclear how large the rally will be and whether members of domestic extremist groups will attend, security officials say they will be ready if there is unrest. They want to avoid the mistakes of Jan. 6, when officers were unprepared for the siege and were overwhelmed by former President Donald Trump’s supporters.

On Monday, congressional officials approved a plan to put temporary fencing back around the Capitol ahead of the rally. Police are preparing for potential violent clashes at Saturday’s rally and planning for the possibility that protesters may arrive with weapons, according to three people familiar with the preparations. Officers are monitoring hotel bookings, flights, car rental reservations and buses being chartered to bring groups into Washington.

“I urge anyone who is thinking about causing trouble to stay home,” said Capitol Police’s new chief, Tom Manger, in a statement. “We will enforce the law and not tolerate violence.”

Capitol Police say that since that attack – which injured about 150 officers and left five people dead – they have “improved training, created a critical incident response plan, acquired additional equipment and technology, and launched a now department-wide operation planning process.”

More recently, the Capitol Police has taken more dramatic measures to ensure order is maintained: Last week, the department issued an emergency declaration that will allow it “to deputize outside law enforcement officers as United States Capitol Police Special Officers.”

“We want to reassure everyone these are temporary measures to ensure everyone’s safety,” Manger said. 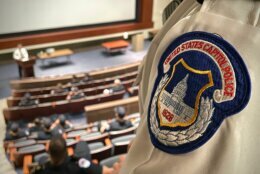 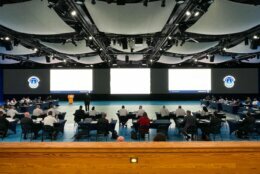 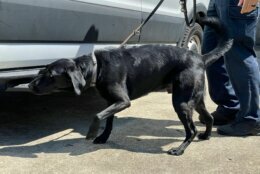 The Capitol Police announcement came hours after Manger and other security officials briefed congressional leaders on the preparations and the plans for a temporary fence, which were first reported Thursday by The Associated Press. Leaving the meeting, Senate Majority Leader Chuck Schumer said he felt law enforcement is “ready for whatever might happen” on Saturday.

“I believe that they are well prepared, thorough, professional, and I think they are better prepared than people were before Jan. 6,” Schumer said.

It also came after Capitol Police arrested a man who had a bayonet and machete in his pickup truck outside of Democratic National Committee headquarters just after midnight on Monday morning. The man, Donald Craighead of Oceanside, California, had a swastika and other white supremacist symbols painted on his truck and told officers he was “on patrol.” Police said it was unclear if he was planning on attending any upcoming demonstrations.