The man who drove his pickup truck onto the sidewalk of the Library of Congress last week and threatened to have a bomb will remain in D.C. jail.
Listen now to WTOP News WTOP.com | Alexa | Google Home | WTOP App | 103.5 FM

The man who drove his pickup truck onto the sidewalk of the Library of Congress last week and threatened to have a bomb will remain in D.C. jail.

A federal judge has continued Floyd Roseberry’s mental competency evaluation until Sept. 22, to allow time for changes in Roseberry’s medications.

During an appearance before a D.C. District Court on Aug. 20, Roseberry told the judge he had gone two days without his medication, which included blood pressure medication and what he referred to as “mind medicine,” and he said he wasn’t sure he could follow the proceedings. The judge initially scheduled a mental competency evaluation and a follow-up hearing for Wednesday.

A clinician with the D.C. Department of Behavioral Health who met with Roseberry for more than an hour Tuesday, told the court she’s concerned about the medications prescribed by Roseberry’s psychiatrist in North Carolina, who has agreed to prescribe different medications for his patient.

Roseberry, who is from Cleveland County, North Carolina, is facing weapons of mass destruction charges. His bomb threat sparked a standoff with police that lasted for several hours before he surrendered to police. Roseberry has not entered a plea. 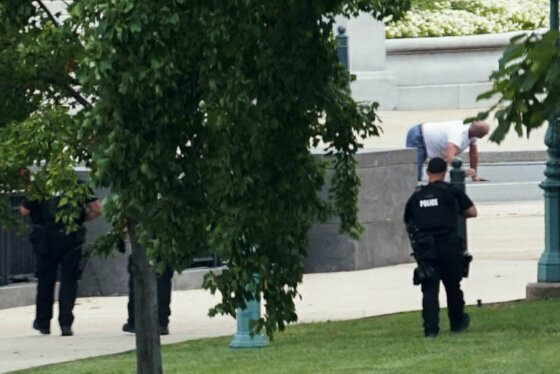 No bomb in truck at Library of Congress; police clearing scene

The man suspected of driving his pickup truck onto the sidewalk in front of the Library of Congress, claiming to have a bomb and triggering an hourslong standoff, surrendered to authorities Thursday afternoon, police say.