No bomb in truck at Library of Congress; police clearing scene

The man suspected of driving his pickup truck onto the sidewalk in front of the Library of Congress, claiming to have a bomb and triggering an hourslong standoff, surrendered to authorities Thursday afternoon, police say.
Listen now to WTOP News WTOP.com | Alexa | Google Home | WTOP App | 103.5 FM
(1/11) 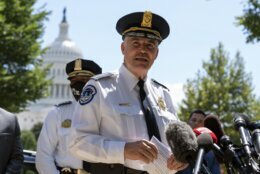 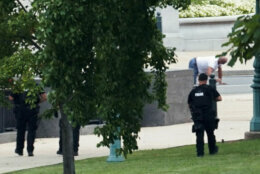 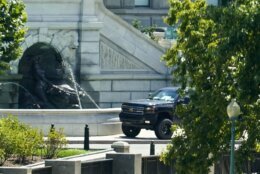 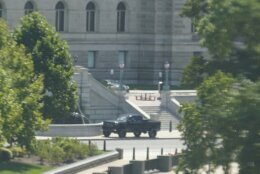 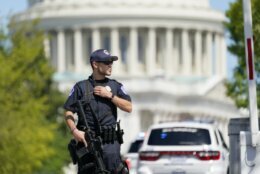 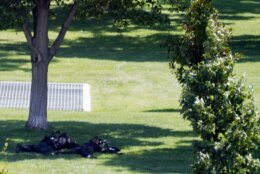 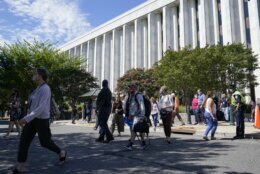 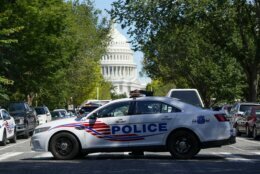 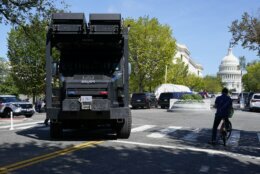 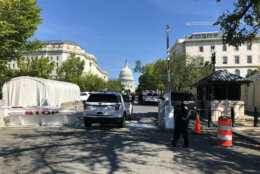 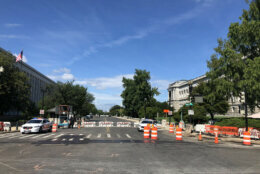 The man suspected of driving his pickup truck onto the sidewalk in front of the Library of Congress, claiming to have a bomb and triggering an hourslong standoff, surrendered to authorities Thursday afternoon, police say.

In a news release Thursday evening, the Capitol Police said they found “possible bomb making materials,” but no bomb, in Roseberry’s truck.

Shortly after 4:30 p.m., D.C. police tweeted the truck had been “cleared,” and that all road closures surrounding the Capitol, including those stretching into the residential neighborhood east of the U.S. Capitol Complex, would be lifted.

UPDATE: The vehicle related to the active bomb threat near the library of Congress has been cleared. Road closures that were in place have now been lifted.

Residents may return to their homes. Thank you all for your patience during this critical incident.

The incident began unfolding shortly after 9:15 a.m. Thursday, after police said the man drove a black pickup onto the sidewalk in front of the Library of Congress and told officers he had a bomb. One officer observed what appeared to be a “detonator” in his hand, spurring an “active bomb threat investigation” and a widening evacuation of parts of the Capitol Hill neighborhood.

Manger said police negotiated with Roseberry during the standoff, including trading messages with the man via a whiteboard. Police also sent a “robot” to deliver a phone to Roseberry to communicate, but Manger said the man would not use it.

“As far as we could tell, it was just his decision to surrender at that point,” Manger told reporters.

Asked about Roseberry’s background, Manger said authorities are not aware of any law enforcement or military experience and said Roseberry does not have a serious criminal history in North Carolina.

The police chief also said Roseberry had some “issues he was dealing with,” including the apparent recent death of his mother.

During an earlier news conference, authorities revealed Roseberry had been livestreaming parts of the incident. In a series of videos posted to Facebook Thursday, Roseberry was seen inside a truck near the Capitol with a metal barrel with wires and a dial attached to it. In rambling remarks, the man referenced Afghanistan, said he was part of a revolution, made threatening remarks about President Joe Biden and made disparaging comments about Democrats. The man said he didn’t want to hurt anyone but that the bomb was wired to go off if police shot at his truck.

The police chief said there is no indication Roseberry acted with anyone else in carrying out the bomb threat, “but that, again, is part of the ongoing investigation,” Manger said.

For much of the day, the Capitol grounds were the scene of a massive police presence. In addition to Capitol Police, D.C. police, the FBI and the Bureau of Alcohol, Tobacco, Firearms and Explosives all responded. Armored trucks were seen and police snipers were seen lying on the lawns of the Capitol grounds with guns trained on the truck.

A few hours before Roseberry surrendered, D.C. police had expanded the evacuation notice into the residential neighborhood directly east of the Capitol. D.C police lifted the notice shortly after 4:30 p.m.

The House and Senate are not in session this week, but workers at the library and across the Capitol Complex were evacuated shortly after the incident began unfolding.

Daczo Zsuzsa, who works at the Library of Congress, told WTOP she was evacuated form the library’s Jefferson Building at about 9:20 a.m. Thursday to another library building. There, she sheltered in place for a few hours before being given the all-clear to leave the building. She said employees were directed to leave so suddenly that she left her purse behind and had to borrow $5 to take the Metro home.

“But it’s kind of complicated to get to Union Station,” she said, referring to the extensive road closures surrounding the Capitol.

John Cattaneo has lived just four blocks from the Capitol for 24 years. He said that he wasn’t too nervous about what happened, in part because he didn’t hear a lot of sirens or helicopters.

During the last year or two, Cattaneo said he’s witnessed all different kinds of protests and fences going up, as well as police and National Guard presence.  Despite that, he said he generally feels really safe in the neighborhood.

“I absolutely love Capitol Hill; I love D.C. I am not going anywhere. No way,” Cattaneo said.