D.C. Mayor Muriel Bowser ordered another curfew for the District on Monday, starting at 7 p.m., following protests in response to the death of George Floyd in police custody. A similar curfew will be in place Tuesday night.
Listen now to WTOP News WTOP.com | Alexa | Google Home | WTOP App | 103.5 FM

D.C. Mayor Muriel Bowser ordered another curfew for the District on Monday, starting at 7 p.m. and lasting until 6 a.m., following protests in response to the death of George Floyd in police custody.

She said the city will also be under a curfew Tuesday night as D.C. expects more demonstrations.

“I have spent this morning walking around the city to assess damage, and there is significant damage in the downtown areas, especially in the blocks immediately around Lafayette Square,” Bowser said at a news conference.

“And I want to be very clear about something, as the nation’s capital: We are frequent hosts to First Amendment demonstrations, and we applaud the American spirit of protest, and especially protest to the federal government.

“However, we do not and we will not allow the continued destruction of our hometown by people who are coming here to protest or by D.C. residents,” Bowser said.

She said that every single American should be outraged by the death of George Floyd in Minneapolis. Floyd, a black man, pleaded for air as an officer pressed a knee into his neck. The officer has been charged with murder and manslaughter.

And that she empathizes “with the righteous cause that people are here protesting. However, smashed windows and looting are becoming a bigger story than the broken systems that got us here.”

Among the stores damaged during Sunday’s protests were a looted liquor store in Foggy Bottom, a Giant food store in Shaw and a Sephora in Gallery Place. In Friendship Heights and Tenleytown, many stores were boarded up Monday, including a Target — which was hit — along with Rodman’s specialty store on Wisconsin Avenue.

While members of the media and those serving essential functions are exempt from the curfew, D.C. Police Chief Peter Newsham said others will be arrested.

“If you are not a member of the media or you do not have an essential function, you can anticipate that local police and federal police will take you into custody,” Newsham said. “That is a warning. And I am hopeful that that warning will be shared with everybody who is listening.”

WMATA adjusted its service hours in light of the new curfew.

The Metrorail system will close at 8 p.m. and Metrobus service will end at 9 p.m.

Since voting is an essential function, voting will not be impacted Tuesday. Polls are slated to remain open until 8 p.m.

“Two-thirds of the arrestees were charged with instances of felonies,” Newsham said. “There were also a … significant number that were arrested for violating the curfew.”

He added that police are not done making arrests.

“Our city, thankfully, has a very expansive CCTV system. We have government-owned cameras. We have privately owned cameras,” Newsham said. “We are urging our business owners that, if they do have images of people, either destroying property or hurting somebody, that they share those images with us and I can assure you we will follow up.”

The National Guard is also expected to be out across the District in larger numbers Monday in anticipation of more protests.

When Newsham was asked about accounts of journalists being hurt by officers, he said information should be passed on to authorities.

“If you have a specific instance of where you believe that a police officer acted inappropriately, we have a very thorough system of investigating those issues,” he said. “Please pass that along to us. We’ll investigate. All of our police officers wear body-worn cameras. If you don’t want the police department to investigate it, we have an independent Office of Police Complaints that can look into that matter.”

Earlier, Bowser said she was “sad and angry” over the destruction in the District after protesters clashed with authorities over the death of Floyd for a third night.

“We were certainly very sad and angry, quite frankly, about the destruction that happened here,” Bowser told NBC’s Today show. “We’re in Lafayette Park, right in the center of our city, in front of the White House, but we had damage in blocks throughout the city.”

Bowser said she wants people to be able to protest but decried vandalism and looting, which D.C. officials spent much of the morning cleaning up.

“We recognize that people are frustrated and mad but tearing up our beautiful city is not the way to bring attention to what is a righteous cause.”

Monday marks a week since the death of Floyd.

The mayor said authorities have seen some of the destructive tactics used in demonstrations before.

“Tactics, like the types of tools that they use restocking, setting fires here and there to try to draw in the police to various locations,” she said. 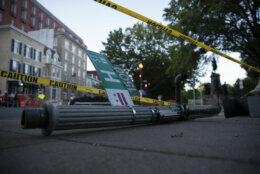 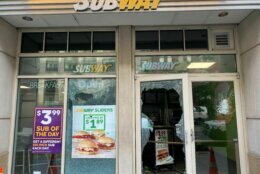 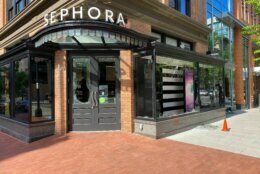 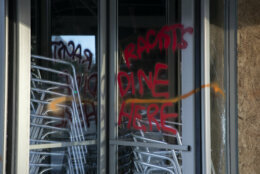 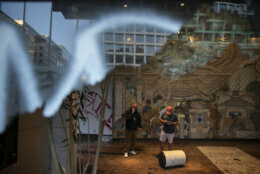 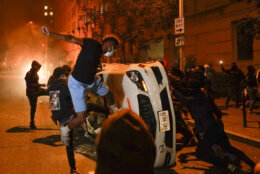 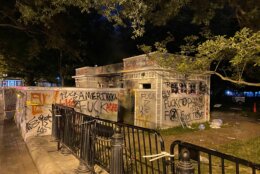 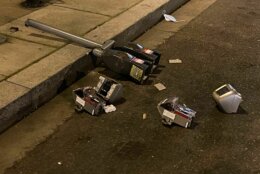 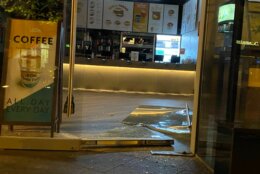 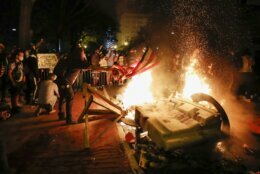 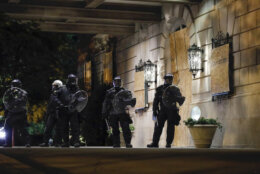 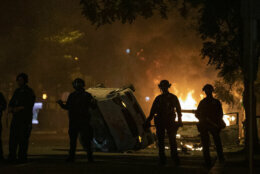 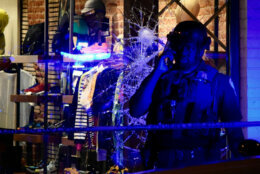 Still, Bowser said most of the protesters acted peacefully.

Bowser also noted that D.C. is prepared for more.

“We’re working with our intelligence and all of our law enforcement partners to figure out who’s coming where.”

Bowser had a warning, too, as the District prepared for a fourth night of protests.

“We don’t want people to come here and break the law to damage property to hurt people,” she said. “But if we are out in the communities and we see that those people are going to have to be arrested and brought to justice.”

Bowser said she believes about half of those arrested Sunday night are not from D.C. or the nearby D.C. region.

Beyond the city boundaries, other protests are planned, including one set to start at 1 p.m. in Manassas, Virginia, according to a post on Twitter.

President Donald Trump on Monday derided the nation’s governors as “weak” and demanded tougher crackdowns on protesters in the aftermath of another night of violent protests in dozens of American cities.

Trump spoke to governors on a video teleconference with law enforcement and national security officials, telling the local leaders they “have to get much tougher” amid nationwide protests and criticizing their responses.

“Most of you are weak,” Trump said. “You have to arrest people.”

This came after Secret Service agents had rushed Trump to a White House bunker on Friday night as hundreds of protesters gathered outside the executive mansion, some of them throwing rocks and tugging at police barricades.

The president spent nearly an hour in the bunker designed for use in emergencies like terrorist attacks, according to a Republican close to the White House who was not authorized to publicly discuss private matters and spoke on condition of anonymity. The account was confirmed by an administration official who also spoke on condition of anonymity.

Tensions have flared across the U.S. in multiple cities, from Philadelphia to Los Angeles.

Protesters in Philadelphia hurled rocks and Molotov cocktails at police, officials said, while thieves in more than 20 California cities smashed their way into businesses and ran off with as much as they could carry — boxes of sneakers, armloads of clothes, and cellphones, TVs and other electronics.

In Minneapolis, a tanker truck driver drove into a massive crowd of demonstrators. No protesters appeared to be injured, and the driver was arrested.

At least 4,400 people have been arrested over days of protests, according to a tally compiled by The Associated Press. Arrests ranged from stealing and blocking highways to breaking curfew.

In Salt Lake City, an activist leader condemned the destruction of property but said broken buildings shouldn’t be mourned on the same level as black men like Floyd.

“Maybe this country will get the memo that we are sick of police murdering unarmed black men,” said Lex Scott, founder of Black Lives Matter Utah. “Maybe the next time a white police officer decides to pull the trigger, he will picture cities burning.”

The unrest erupting across the country comes as most Americans are still reeling from the impact of the coronavirus pandemic.

It’s threatening to upend efforts by health officials to track and contain the spread of the disease just as those efforts were finally getting underway.

Health experts need newly infected people to remember and recount everyone they’ve interacted with over several days in order to alert others who may have been exposed, and prevent them from spreading the disease further. But that process, known as contact tracing, relies on people knowing who they’ve been in contact with — a daunting task if they’ve been to a mass gathering.

The process also relies on something that may suddenly be in especially short supply: Trust in government.