The protests, some destructive, going on in D.C. following the death of George Floyd feel familiar to people who lived through the 1968 riots after the assassination of Dr. Martin Luther King Jr.
Listen now to WTOP News WTOP.com | Alexa | Google Home | WTOP App | 103.5 FM

The protests, some destructive, going on in D.C. following the death of George Floyd feel familiar to people who lived through the 1968 riots after the assassination of Dr. Martin Luther King Jr.

“I am 86-years-old, and I sat with Dr. King at the Chili Bowl and listened so attentively as he shared his dreams,” Virginia Ali, the co-founder of Ben’s Chili Bowl on U Street in Northwest, said. “Now I can only hope I live long enough to see positive change.”

Seeing frustration-fueled riots in the District twice in one lifetime, Ali said, is heartbreaking.

“After all these years, it’s amazing to me that we’re continuing to go through the same thing,” she said.

Ali said it saddens her to see people fighting for the same basic human rights her generation struggled for so many decades ago.

“Words can’t express the pain that I feel when I continue to see our young people dying at the hands of police,” she said.

During the fiery, destructive D.C. riots of 1968, Ben’s Chili Bowl was one of few places left untouched along the U Street business corridor in Northwest. It took many neighborhoods in the city 20 years to rebuild.

Her message to people who now are breaking windows and lighting fires to express frustration: “I would just simply say – let’s stop and collect ourselves and think about what we’re here to do. We’re not here to destroy the neighborhood, we’re here to change the laws of the country.”

Ali doesn’t think that current protesters who are serious about change are the ones being destructive; she believes positive change can begin with people examining their hearts and national leaders changing laws that get enforced. 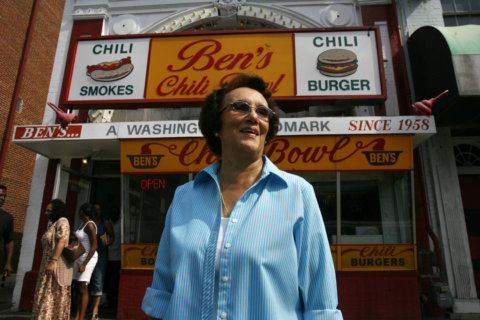 From Black Broadway to Black Power: How Ben’s Chili Bowl survived the 1968 riots to become a DC landmark