Mayor Muriel Bowser called for D.C. statehood Tuesday, citing scrutiny over how federal officials have handled the protests in the aftermath of George Floyd’s death in police custody last week.

“Sometimes, when we talk about statehood, people wonder why we fight so hard for it,” Bowser said. “And I think that the events of the last several days demonstrate that our fight for statehood is more than about getting two senators. It’s also about our right as taxpaying Americans to autonomy, and the autonomy that can only be fully achieved with statehood.”

“Yesterday, I imposed a curfew at 7 p.m. About 25 minutes before that curfew, we note, as many people around the country noted, that protesters in front of the White House were dispersed using some form of munitions,” she said.

I imposed a curfew at 7pm. A full 25 minutes before the curfew & w/o provocation, federal police used munitions on peaceful protestors in front of the White House, an act that will make the job of @DCPoliceDept officers more difficult. Shameful!

The mayor said she saw no reason to use munitions against the demonstrators at Lafayette.

“From what I could see, just like you all could see, I didn’t see any provocation that would warrant the deployment of munitions, and especially for the purpose of moving the president across the street,” Bowser said.

Bowser’s curfew goes into effect once again from 7 p.m. Tuesday until 6 a.m. Wednesday. She said she has no intention of extending it.

Metrorail service will operate until 8 p.m. and Metrobus service will end at 9 p.m. Tuesday, in accordance with the curfew.

D.C. police Chief Peter Newsham went through his account of Monday’s incident at Lafayette Park in front of the White House, which has come under significant scrutiny after accusations that tear gas was used on peaceful protesters by federal authorities ahead of Bowser’s 7 p.m. curfew.

“Yesterday began with two separate groups at approximately 3 o’clock, one in Lafayette Square and the other in the vicinity of the U.S. Capitol. Both groups assembled peacefully at these locations,” Newsham said. “At around 6:30, the group at Lafayette Plaza was alerted by federal law enforcement officers, who gave warnings for them to disperse. I had received prior to that, just before that, that there would be a presidential movement in the area. The Metropolitan Police Department did not participate in that movement.”

The “presidential movement” Newsham mentioned is in reference to President Donald Trump walking from the White House to St. John’s Episcopal Church nearby.

Trump’s trip to the historic church was meant to be a show of strength, according to CBS News. A senior administration official told CBS News White House correspondent Paula Reid that the president and his top advisers wanted to convey strength and control over the situation after hearing reports that Trump was sitting in a bunker during the protests.

The president’s church visit has been criticized, with St. John’s Bishop Mariann Budde calling it “antithetical to the teachings of Jesus.”

Budde said in a statement Monday night that the diocese in no way supports Trump’s “incendiary response to a wounded, grieving nation.”

There are reports that tear gas was used on the group at Lafayette Square to clear them out ahead of Trump’s walk. U.S. Park Police said they only used smoke canisters. It remains unclear whether other law enforcement agencies used tear gas or other irritants on the crowd.

Abrupt and extraordinarily aggressive dispersal of protesters at H and 16th with Trump about to speak from the Rose Garden.

In a span of about 10 minutes they’ve unleashed everything from tear gas to flashbangs sending hundreds on a frantic retreat down 16th. pic.twitter.com/35H1BQjZTw

Newsham said he couldn’t speak to whether tear gas was used.

“I was told of the movement, it was an unplanned movement, shortly before it occurred. The Metropolitan Police Department did not participate. So, it would be out of turn for me to speak about who, what, where and how munitions were deployed,” he said.

He added that he may be able to speak more about it at a later date after gathering more information.

In all, the police chief said officers made more than 300 arrests, primarily for violating the citywide curfew, but also for burglary and rioting.

More protests are planned for Tuesday evening, which will be the fifth night of demonstrations in the District.

Newsham made specific note of an incident on Swann Street Northwest, where some residents opened their homes to protesters who ended up trapped on the street as police converged to enforce the city’s curfew Monday night.

Among those trapped was WTOP anchor Ken Duffy as the crowd of police officers swarmed in and cut off access to the neighborhood.

Newsham said police had tracked a group of protesters to the area and got them stopped in the 1400 block, where the department made “a significant arrest of multiple folks who were in violation of the curfew.”

Newsham said protesters who took refuge were not arrested, but 194 others in the area were.

Bowser and D.C. Del. Eleanor Holmes Norton have long been advocates for D.C. statehood. Supporters of statehood have repeatedly argued that the 700,000 D.C. residents are disenfranchised and excluded from representation.

Bowser has said the District has been locked out of the national conversation because it doesn’t have members of Congress who can vote on the city’s behalf.

Opponents, including Rep. Jim Jordan, R-Ohio, have cited Founding Father James Madison’s words in 1788, which argued that the national capital needed to be distinct from the states. In the past, Republicans in Congress have raised concerns about the city becoming a state.

If you’re headed to the polls Tuesday — which are open until 8 p.m. — the District’s 7 p.m. curfew won’t prohibit you from casting a ballot. Voting is an essential activity.

WTOP has everything you need to know about the D.C. primary.

There were also two additional COVID-related deaths. So far, 470 D.C. residents have died from the virus.

Below are maps for cases by ward, neighborhood and community spread. Data are available at D.C.’s coronavirus website. 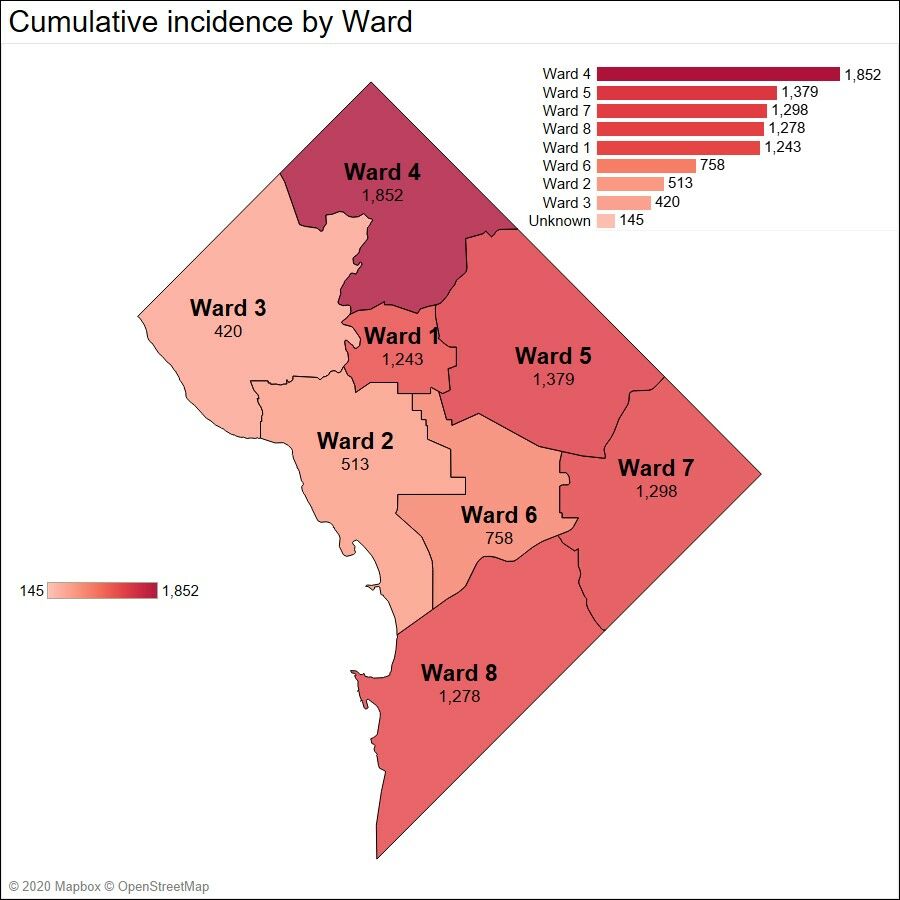 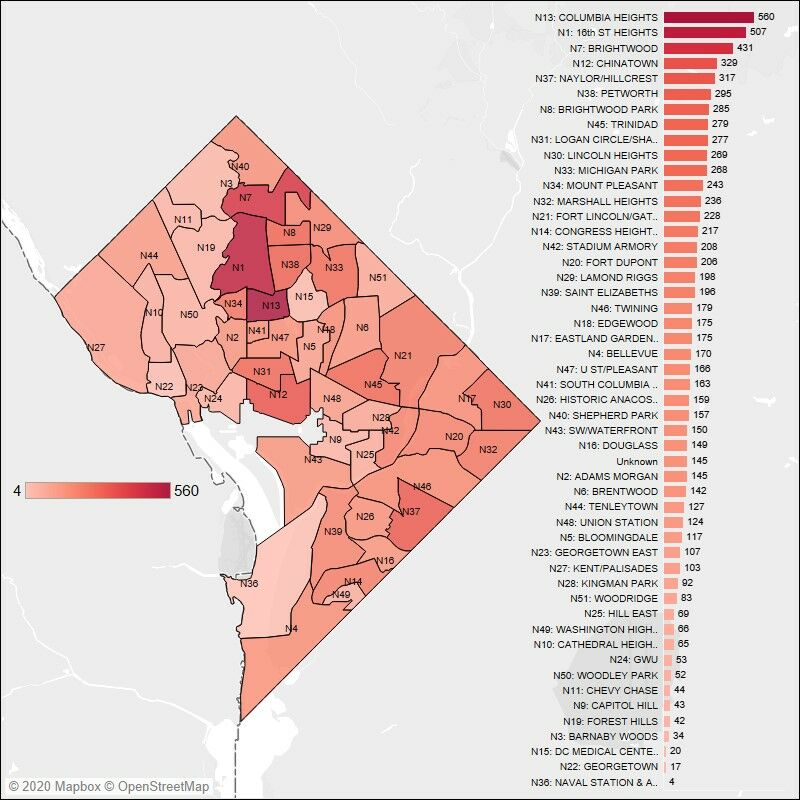 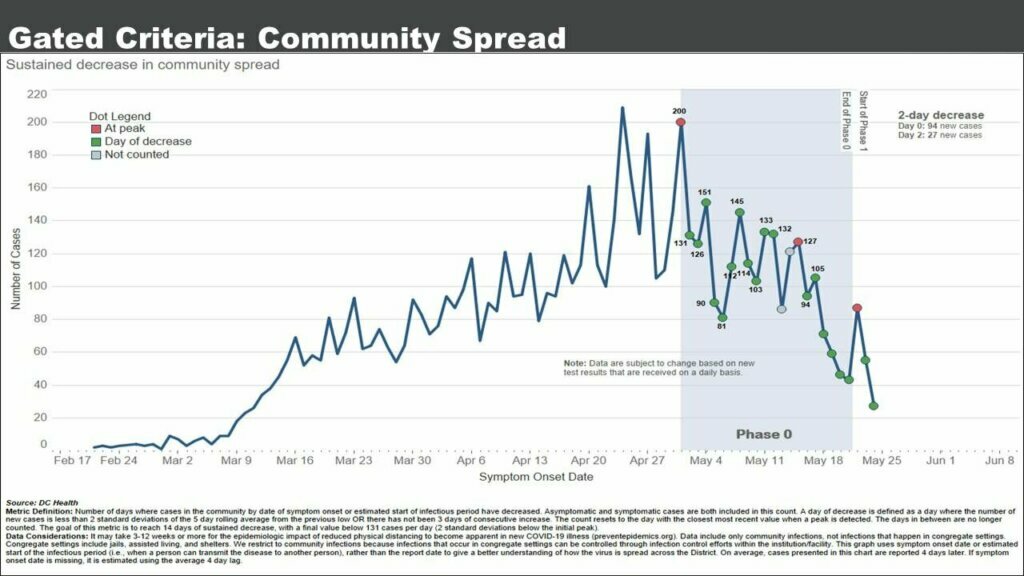 WTOP’s Abigail Constantino, Nick Iannelli and The Associated Press contributed to this report.