Hours after their slain classmate was laid to rest, students at Anacostia High School gathered for a rally and issued a list of demands to local officials.
Listen now to WTOP News WTOP.com | Alexa | Google Home | WTOP App | 103.5 FM
(1/3) 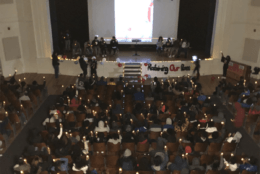 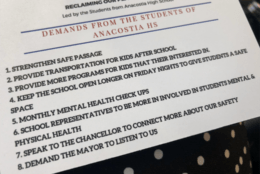 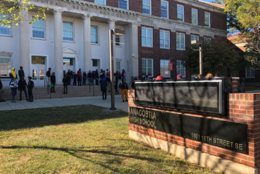 In the wake of last week’s shooting death of a 15-year-old Anacostia High School student near Nationals Park, some of his classmates have organized in an effort to stop gun violence and improve safety.

Thomas Johnson was laid to rest Friday morning. Later that afternoon, students gathered in the school auditorium for a rally.

A banner hanging from the front of the stage read “Reclaiming Our Peace.”

“Our community still grieves his loss and the loss of other children gone too soon,” Principal William Haith said of Johnson. “Youth violence is not just an Anacostia problem. It’s not a Ward 8 problem. It’s a crisis across the nation.”

Organizer Kamryn Anthony and other students drew up a list of demands to local officials. They include improving the District’s Safe Passage program, which protects kids as they travel to and from school; monthly mental health checkups; keeping the school open longer on Fridays as a safe space for students; and meetings with both the mayor and D.C. Public Schools chancellor.

“Every year we lose a student of Anacostia to gun violence, and as a community we need to rally together and protect our youth,” Anthony said.

Ward 8 D.C. Council member Trayon White said he had “buried 149 people in this community in my 35 years of life” and had been to two funerals that day — and missed two.

“If this was happening … somewhere else, it wouldn’t be tolerated. But we have become complacent and numb to the violence,” he said. ” … That’s why I’m on the front line.”