1,000 volunteers show up to help clean up the Anacostia

Volunteers cleaning the Anacostia River weren't surprised by how much trash they picked up. They were surprised by what that trash was. See photos and watch a video of their cleanup.
Listen now to WTOP News WTOP.com | Alexa | Google Home | WTOP App | 103.5 FM

Last year, about 500 volunteers showed up at Kingman Island for International Coastal Cleanup Day, and in about an hour’s worth of work, they picked up 5,000 bags of trash. Most of it was plastic bottles, but there really was a wide range of things.

This year, over a thousand people showed up to help clean up Kingman Island on Saturday, so the expectation was that there would be even more trash taken out of the Anacostia. There were plenty of people walking around with trash bags filled to the top — few people were surprised.

This year she found a plastic fireman’s hat usually given out to little kids. 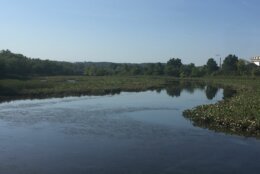 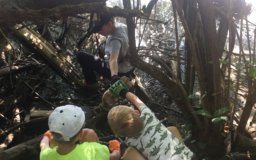 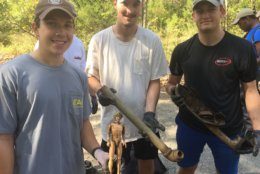 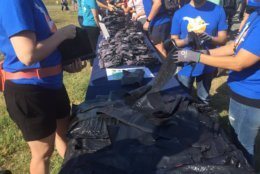 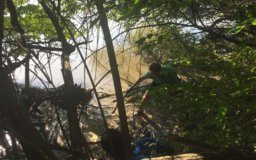 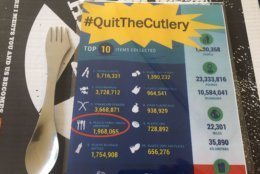 Keith Rich of Vienna, Virginia, was at the Kingman Island cleanup event for the first time after moving to the area from Hawaii. When he participated in Coastal Cleanup Days there, he usually found fishing equipment, buoys and other marine debris. So what surprised him most about Saturday wasn’t that he had another filled up trash bag, just what was inside of it.

“Here, it’s just humans being lazy, which is sad,” said Rich, who also found an old Nerf football in the water.

Frankie Gagliano, a student at Georgetown University, was with some of his fraternity brothers and they all filled up five trash bags in less than a half-hour. Some of it included heavy pieces of metal, and even an old, muddy Ken doll.

“So much trash,” he conceded. “And right by the water.”

Kelsey McCallum was right in the water — well, at least standing on some piled up driftwood, getting bottles out of the water and giving them to her kids, who sat in the mud filling up their trash bags. This was her family’s first time coming to this event, and as someone who was new to the area, she actually was surprised by how much trash was piled up.

“All kinds of stuff, a lot of water bottles, a sippy cup, even some flossers” were going into the two trash bags she filled up within just a few minutes.

“There’s a lot here,” she lamented. “I can count still in the water probably a dozen (empty bottles) that I’m seeing but I must have picked up a good case of it already.”

Jaden Walker, of D.C., said he saw lots of bottles on the coastline when he was walking to Kingman Island. But he was surprised by just how much other trash was there.

“I’m happy to be here” to help cleanup, said Walker. “I’m helping out. If all these people wouldn’t have come … it would have never gotten clean.”