A concert to benefit Notre Dame Cathedral is set for Friday night at the Basilica of the National Shrine of the Immaculate Conception. Among those performing will be Johann Vexo, Notre Dame’s organist, who was playing when the fire broke out April 15.
Listen now to WTOP News WTOP.com | Alexa | Google Home | WTOP App | 103.5 FM

A concert to benefit Notre Dame Cathedral is set for Friday night at the Basilica of the National Shrine of the Immaculate Conception. Among those performing will be Notre Dame’s organist Johann Vexo, who was playing when the fire broke out April 15.

“It was absolutely terrible. I was devastated to see the fire on the roof,” Vexo said. “I of course knew that nothing could be done to stop it.”

He called the sound of Notre Dame’s organ “absolutely stunning” but said the basilica’s instrument was “very impressive.”

The basilica’s rector, Monsignor Walter Rossi, described the basilica as a “younger sister” to Notre Dame. The basilica had already started an online fundraising effort for Notre Dame’s restoration. The concert Friday will be free and open to the public, but donations will be accepted at the entrances.

The concert, which is set to begin at 7 p.m., was organized in partnership with the French Embassy.

Vexo added it does not appear the Notre Dame organ was damaged by the blaze or the firefighting effort, but he said the organ has yet to be turned on. “We don’t know what we will find when we switch it on,” he said. 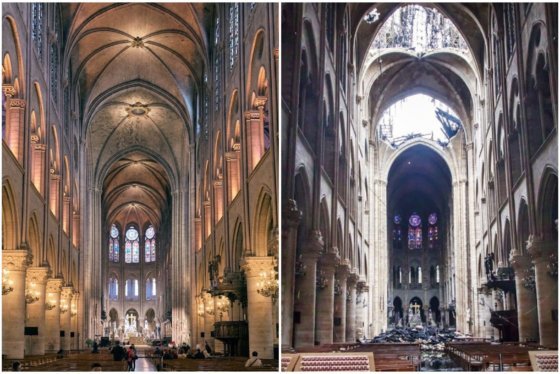 Before and after images of Notre Dame reveal what was lost

Paris is reeling after an inferno tore through Notre Dame Cathedral late Monday, threatening to incinerate centuries-old architecture and relics. See images taken before and after the fire for an idea of what was lost.