Coronavirus News: Montgomery Co. to lift mask mandate | Some may need fourth shot | Va. among best for vaccinations | Local cases of COVID-19 | How many in DC region are vaccinated?
Home » Washington, DC News » VIDEO: Inside a historic…

VIDEO: Inside a historic DC fire station — that’s among the last of its kind

WASHINGTON — Its predecessor was burned to the ground by the British, and as WTOP told you around Halloween, it may contain a ghost.

Interesting stories surround D.C. Engine Co. 3, which is currently located on New Jersey Avenue in Northwest. The firehouse is responsible for protecting landmarks including the Capitol and Union Station. “This is a busy firehouse. They run anywhere from 300 to 500 runs a month, which is a lot of runs, and we’re not the busiest house in the city,” said Jim Embrey, curator of the D.C. Fire and EMS Museum, which is on the third floor of the firehouse.

The current fire engine simply has “Columbia” painted on the front — a nod to the company’s roots, which trace back to the volunteer Columbia Fire Company, which was created in 1804. And the fire company’s history is intertwined with American history.

“During the War of 1812, when the British attacked the capital, they actually burned our first firehouse down first, before they started burning the capital down,” said veteran firefighter Margie Dickey, who’s spent her entire career at Engine 3. “So if you take the firehouse out of the picture you have more success with your other endeavors.”

“The volunteer firefighters begged the British not to burn the firehouse down because it didn’t belong to the government. It was privately owned,” Embrey added. “But the British said ‘Maybe so, but it’s on government property, so it’s gone.’” 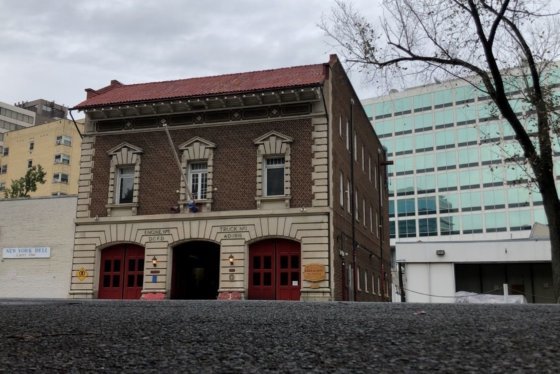 Is DC’s Engine Company 3 haunted? Some think so

A long-dead firefighter? A hero horse? Some believe the home of Engine Company 3, just blocks from the Capitol, is haunted by a ghost — or ghosts.

This company’s current building is over 100 years old, still retains features like fire poles and a spiral staircase, and has amassed its own lore over the decades.

“This particular firehouse, we believe, has a ghost,” Dickey said. Stories center on Benjamin Grenup, a member of the Columbia Fire Company, who was long believed to be the first line-of-duty death of a firefighter in D.C. “We believe he’s still in the firehouse with us.” (Research in recent years has found that another firefighter, John Anderson, died two months before Grenup, and that there may have been previous deaths as well.)

The building, built in 1916, is showing its age aside from the possible accumulation of spirits. While it’s not going anywhere, because of a historic designation, its future as an active firehouse is far from certain.

“Our most recent firetruck, we only have an inch clearance on each side,” Dickey said. “We’re having more and more difficulty getting apparatus that actually fits inside of this firehouse.”

“The old firehouses are slowly but surely being replaced with newer facilities,” Embrey said. He said he believes residents and visitors should take note of this building, and others like it that remain in the changing city. “I think they should sit back while they have a chance and look at a lot of the architecture here in Washington. This was a beautiful, beautiful city.”