For the next week, there is what can be best described as a "pop-up" memorial on the White House Ellipse. Titled "Stop Everyday Killers," it’s meant to highlight just how severe the opioid prescription situation is in America.
Listen now to WTOP News WTOP.com | Alexa | Google Home | WTOP App | 103.5 FM

WASHINGTON — For the next week, there is what can be best described as a “pop-up” memorial on the White House Ellipse. Titled “Stop Everyday Killers,” it’s meant to highlight just how severe the opioid crisis is in America.

The first thing you’ll see when you walk in is a little locker-sized memorial that was created for a mother named Felicia’s son Louis. It has pictures, art work he created while in elementary school, including a letter that told her how much he loved his mother.

There is also his football jersey and pictures of him playing sports. It was a high school football injury that got Louis the prescription that started his addiction.

“We’ve brought a lot of her son’s personal effects to help people identify ‘this is your next door neighbor, this is your nephew, your friend.’ how much it affects everyone,” explained Jenny Burke, a senior policy director with the National Safety Council.

“This just helps put that personal face on the issue.”

Next to that sits what looks like a half-open medicine cabinet, several of them right next to each other in a row.

One of them probably looks just like the one in your bathroom on the surface, down to the way you left it this morning. But inside the open end are statistics about the impact prescription opioids are having on the country, and in the mirror next to it, a chance for you to look at yourself and consider the numbers.

“Medicine cabinets are in pretty much every household in the United States,” said Burke. “You can see yourself in the medicine cabinet so you know you have just as much of a chance of having this issue as anybody else.”

At the end you can also pick up a bag — postage paid already — that lets you safely dispose of any prescriptions you might not need anymore.

The part of the memorial meant to put things in perspective is the Wall of Pills. 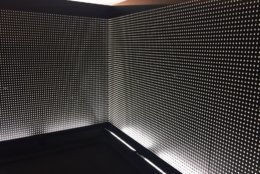 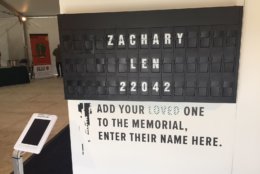 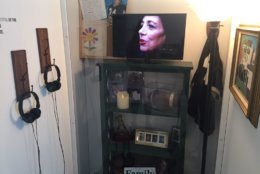 It’s really three walls in a U-shape, and from afar it just looks like 22,000 or so white dots on a black wall.

“When you look at all the little dots on the wall, it kind of makes your eyes hurt,” noted Burke.

Which is the point.

It’s supposed to alarm your senses if you’re not willing to look closely and see the faces and the humanity at stake here. But if you do take the closer look at those 22,000 pill shaped dots, you see the faces.

“We do have 50 different faces on the pills that represent the demographics of the people that we lost to overdose,” she added. “Unfortunately we can’t put every single face, we really wanted to help people see that these are all individual lives.”

In Chicago, the National Safety Council has a machine engraving pills with a new face. It’s done every 23 minutes, which is how long it took for someone new to die from an overdose in 2015.

The numbers have jumped significantly since then.

At the end of the memorial is a board that lets you remember anyone you know who died from an overdose. Every few seconds a new name, with another number, is shown.

“It will really help them place their own stamp on it, but also helps other people see that this is growing and this isn’t stopping. It’s 22,000. It has doubled in the last year,” Burke said.

“And if you look at fentanyl and all the other ways people are dying of opioids, it’s not just prescription opioids, that number has tripled. So you know there’s a lot of people whose lives are being lost to this issue and so we really want people to understand the vastness of it, but understand that we get their personal story.”