Nestled within D.C.'s monuments and other tourist attractions, are dozens of homeless camps — areas littered with tents, where those with little or no money now call home. But, why do they choose to live there instead of shelters and do they have a legal right to do so? WTOP goes inside the camps for some answers.
(1/6) 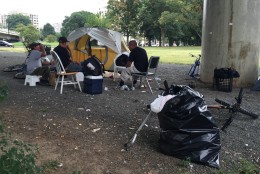 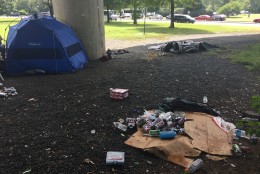 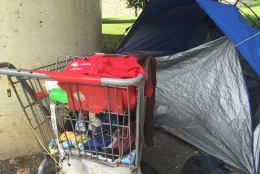 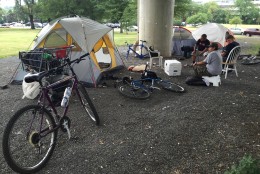 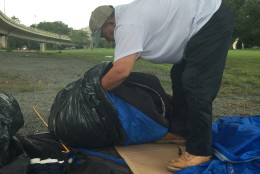 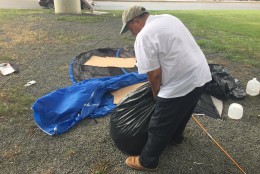 WASHINGTON — Carmelo Garcia moved to the District more than 10 years ago, working cleaning jobs wherever he could to make ends meet.

Then, in 2013, Garcia was attacked at the corner of Georgia and Florida avenues in Northwest. He says he was hit on the head with a baseball bat and needed surgery as a result. Garcia still bears the physical and psychological scars of the trauma.

“I can’t work,” he said in Spanish. “Sometimes I have convulsions. I hear voices.”

Those voices tell him to commit suicide, to jump in front of a car or leap from a bridge. There are marks on his wrists where he has cut himself. He takes medication to silence those demons. To get funds for his medicine, he treks to Virginia Avenue to ask drivers for help.

“It helps keep the voices away,” Garcia said, rattling a bottle with a few pills left inside.

Garcia, like many others, lives under a bridge along Rock Creek Parkway. He’s lived there for seven months, in an encampment with at least six other men.

Dozens of encampments are scattered around the city, according to the Department of Health, even though D.C. officials occasionally remove them. In an exclusive report, WTOP examines why the men choose to be there.

Two weeks ago, the local government closed encampments in Georgetown and Foggy Bottom. The inhabitants were given two weeks notice about the removal. Still, Garcia wondered why they were pushed out in the first place.

“We’re not hurting anyone,” he said.

But, according to D.C. law, homeless people can’t establish an outside abode without the mayor’s consent. There was an official encampment cleanup between Aug. 3-5, where a team of workers from the departments of behavioral health, human services, police, public works and transportation cleaned out the tented areas.

There were more clean-ups from Aug. 13-18, and others are scheduled until November. Many D.C. encampments are on federal or private property, making regulations and enforcement even more complicated.

There are roughly 7,300 homeless people in D.C. this year. This is an almost 6 percent decrease from last year’s number of almost 7,750, according to a report from the Metropolitan Washington Council of Governments. The report analyzed homelessness in the District, Maryland and Northern Virginia.

In 1994, the report said, D.C. was one of the nation’s first jurisdictions to implement the Department of Housing and Urban Development’s Continuum of Care model to address homelessness. Under the model, officials work with transient people to quickly find or maintain housing for them.

Speaking this week on News Channel 8, Mayor Muriel Bowser said city leaders are examining the issue of homelessness. In two weeks, she said, officials will announce new initiatives to combat family homelessness in the District.

“We certainly want to treat our homeless families and neighbors with respect, and get them on a pathway to a permanent home,” Bowser said.

The city has had some success, according to Brenda Donald, deputy mayor for the Department of Health and Human Services.

In the K Street area, specifically, six to eight people have been housed in the past month, Donald told WTOP.

“We’ve had people who have been on the streets for years, who are now living in permanent supportive housing, and are fully engaged when they’re working, and their medical needs are taken of,” Donald said.

In fact, Donald says, Carmelo Garcia might be eligible for Medicaid services to get the amount of medicine he needs to deal with the aftereffects of his attack.

Does anyone really care?

Encampments aren’t just a D.C. dilemma. In June, a group of homeless residents in Baltimore had to leave their spot beneath the U.S. 40 overpass at Martin Luther King Jr. Boulevard when city crews came and built a wooden fence.

Last Friday in Los Angeles, a man was found shot dead in an encampment as the result of an argument. A San Francisco agency spent $186,000 to close 217 homeless camps in the city between July 2014 and February 2015.

In Seattle, however, officials are planning to build three city-regulated homeless encampments. But some residents say the camp would hurt business and blight the community.

“There’s no shortage of housing,” he said. “It’s a matter of matching vacant units with people who need housing.”

To that end, he said, the center doesn’t support the idea of city-sanctioned homeless encampments. They’re not adequate, and those people need better access to more sustainable living.

But for Rafael Cruz, who lives in a camp under the Rock Creek Parkway bridge, sleeping in a shelter is more dangerous than sleeping in a tent.

“Shelters are worse, you get sick,” said Cruz, adding that he once contracted a lung ailment in a local shelter.

Cruz says if he doesn’t find a home by September, he’s thinking about moving to California. At least if he’s homeless there, the weather is nice and he won’t freeze in the winter, he says.

“It’s bad enough where you can die out here,” he said. “You just get under the blankets and hope for the best.”

All told, Cruz just wants a job and a warm place to rest his head at night. He’s a welder by trade and helped build firetrucks many years ago. Things got tough for Cruz when the economy turned in 2007.

Cruz says he’s sought housing for the past eight years. He’ll keep the faith for now, but his hope is slowly starting to fade.

“They’ve gotta emphasize this problem and get it over with,” Cruz said. “The problem is fixable, it’s just they never put their ideas together to get it over with. Nobody really cares.”