Ready for the start of the 2021 MLS season but need a refresher on your D.C. United knowledge? Here is what you need to know about the Black and Red heading into their 26th season.
Listen now to WTOP News WTOP.com | Alexa | Google Home | WTOP App | 103.5 FM

Ready for the start of the 2021 MLS season but need a refresher on your D.C. United knowledge? Here is what you need to know about the Black and Red heading into their 26th season.

After finishing the 2020 season in 13th place in the Eastern Conference with a 5-12-6 record, D.C. Untied made its first coaching change in a decade.

Hernán Losada enters his first season in D.C. He was previously the head coach of Beerschot, a club in Antwerp, Belgium, where he was a player for the club on three separate occasions. He led Beerschot in a promotion to the first division in Belgium.

As for the playing style he prefers for United this season, Losada has made it clear he wants to build a team identity of high pressing, attacking soccer. He mentioned his team needed to be the fittest team in the league to execute his tactics.

Losada is used to getting the best out of his players and has said the team is working extremely hard and are buying into his philosophy. He likes to play a 3-5-2, with the outside midfielders as
wingbacks.

United started their offseason with a historic hire, hiring Danita Johnson as its new president of business operations. She became the first Black president of a Major League Soccer team, and only the third woman to serve in the role in league history.

The club now ends the preseason making another critical hire, brining on Lucy Rushton as the team’s new general manger. Coming over from Atlanta United, Rushton becomes the highest ranking woman executive in charge of player personal in the league.

Despite all the changes around the organization, United reached out to its past to fill out the roster. Former academy product Andy Najar and former MLS SuperDraft first-round pick Rodney Wallace were among several preseason trialists looking to earn a spot with the team.

United confirmed the day before the season opener that Najar, a Honduran international, signed a one-year deal. He rejoins the Black and Red after spending six years playing in Belgium and playing with LAFC for the 2020 season.

In the preseason, United finished with a 1-2-2 record with their only win coming in a 5-1 result against their USL) affiliate Loudoun United.

To kickoff the 2021 season, D.C. United will take on New York City FC Saturday at 8 p.m., and for the first time in over a year, a game will have some fans in attendance at Audi Field.

The D.C. government approved a waiver for 25% capacity — about 5,000 fans — for games at the Buzzard Point stadium.

Fans who could not get a ticket will still have various ways to watch the game from home. D.C. United signed a new television deal with NBC Sports Washington family of networks for English broadcasts, and for the first time in club history, games will be available in Spanish on TeleXitos, Telemundo 44’s multicast network.

The home opener will available on NBC Sports Washington Plus; TeleXitos and can be streamed on D.C. United’s website for free.

Drew Peterson and WTOP’s José Umaña contributed to this report. 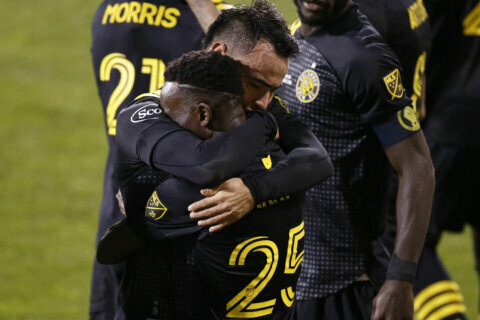