Maryland Gov. Larry Hogan announced Wednesday that the state is rolling out “universal” coronavirus testing for inmates and staff at all state-run correctional and juvenile, the latest in a series of moves to expand COVID-19 testing.

There have been 335 reported coronavirus cases in Maryland correctional facilities — 220 involving uniformed officers; 102 involving inmates; and 13 cases involving other staff. Five inmates who contracted COVID-19 have died, according to state data.

Hogan, who previously announced universal testing for residents and staff at all nursing homes across the state, also said Wednesday that the Maryland National Guard is in the process of distributing up to 3,000 tests per day and is on track to deliver tests to all 227 nursing home facilities in the state by the end of next week.

The announcement came the day after Hogan announced the state had enough testing capacity to begin moving toward widespread testing of people without any symptoms.

The governor has previously said the $9 million purchase of 500,000 test kits from a South Korean company — announced at a statehouse news conference April 20 — has been instrumental in boosting the state’s testing capacity.

However, county executives in infection hot spots have said they still do not have the testing capacity or reserves of personal protective equipment necessary to begin lifting local stay-at-home orders and other restrictions.

A recent letter to the governor from a host of local leaders expressed doubts about the state’s efforts to expand testing capacity and decried a lack of PPE, according to a report in Maryland Matters. The letter was signed by Montgomery County Executive Marc Elrich and Prince George’s County Executive Angela Alsobrooks, among others.

On Wednesday, Hogan laid out a number of new steps the state is taking to boost testing in local communities.

He said the Maryland Department of Health is now sending more than 10,000 tests per week for local jurisdictions to use at community-based testing sites and at VEIP stations that have been repurposed as testing sites.

In addition, Hogan said the health department was sending 33,000 swabs and 2,000 tubes of viral transport — both items necessary for performing and storing tests — to supplement local testing resources.

There are global shortages of viral transport media, and Hogan said the state Public Health Lab has been producing up to 10,000 tubes on its own.

Montgomery County eyes road to reopening, but ‘not the best idea’ now

Montgomery County, Maryland, officials said Wednesday they’re making strides toward reopening in some capacity, and are eyeing a possible time within the next week or two, but they don’t have a definitive date for Phase One.

“I will say this with cautious optimism, that we have seen positive trends and many of those indicators and metrics” needed to reopen, Chief of Public Health Services Dr. Travis Gayles said. “So, we’re going to continue to look at the data and continue to look at trends, sustained trends, over a 14-day period to guide us in our next steps.”

“Assuming the data generally continues the way it’s been, we should be able to accomplish this within the next week or two,” he said, but added he was hesitant to offer a set date.

“I’ve always been reluctant to put out a date because the date becomes the story rather than the conditions and the county being the story,” Elrich said. “None of us is happy being closed. All of us would probably like to go back resuming more normal-ish lives than we’ve been able to live under this.”

“But, if everybody’s focused on a day instead of thinking about what it’s going to take to get to that day, I think it just creates more problems than it’s worth,” he added.

Elrich said one concern is opening things up too quickly, seeing a huge spike in cases and swamping hospital capacity.

“But, again, this isn’t a decision we make for any other reason other than the health data tells us it’s not the best idea right now,” Elrich said.

Elrich also commented on the drug remdesivir, which has shown early promise in helping COVID-19 patients recover from the virus. He said he spoke with the heads of a county hospital Wednesday, asked about remdesivir and how much of the drug they received.

“And this is the thing, this is where people’s promises don’t match reality,” Elrich said. “He had enough doses for three patients. That’s what they got.”

“So, you look at glimpses of things and you realize there’s a lot of possibility here that could bend these curves and alter not just the infection rates, but the outcomes,” he said.

Elrich emphasized the importance of testing and contact tracing, adding, “that’s the kind of thing that brings this virus under control is isolating people who are sick as quickly as possible, so they don’t go through that period when they’re spreading, and they’re spreading because they don’t know they’re sick.”

“If we could eliminate that period or cut it down to just a day or two, it would have an impact on how many more infections get spread in the community. So, I think that contact tracing is going to be critically important for us to do and to do it with tests.” 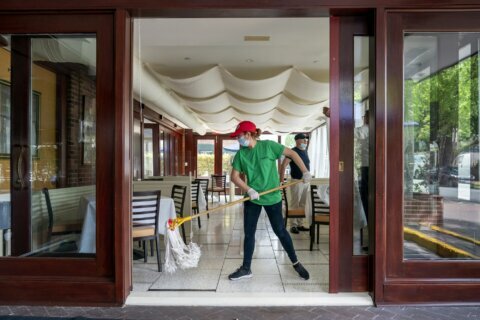