“I should note that, based on the data, I can revise this order at any time to reflect a phased reopening, if the data suggests that we can do that,” she said.

Bowser also said she could extend the order. “I could extend it, yes, but hopefully we won’t have to,” she said.

Bowser made clear that the District will follow health officials’ advice and warned of a second, worse outbreak if reopening is rushed.

“We know and everybody heard Dr. (Anthony) Fauci tell the Senate committee yesterday that rushing to reopen could have tragic results,” she said. “And we’ve said this many times before. We are eager to get our economy turned on, get people back to work, get kids back to school, but we know a second outbreak could be even worse.”

Bowser added that she has spoken directly with Fauci.

Later Wednesday, Bowser offered more guidance on mask use in the District, generally outlining that if you’re in D.C. and you’re around other people in public, you need to wear a mask or cover your face.

So, if you’re in an essential business or other businesses in D.C., and you’re around others, wear a mask. And if you leave your house and you can’t maintain social distancing while traveling, wear a mask.

Instances where you might not need a mask include: while you’re out doing exercise, such as jogging, and can maintain social distancing; or if you are working alone in an office.

Those who aren’t required to wear a mask include: kids under 9 years old (although parents are encouraged to have kids between the ages of 2 to 9 wear a mask); people experiencing homelessness; and people who aren’t able to cover their face due to a medical condition or disability, or who can’t take their mask off without assistance.

If you’re using public transportation in the District, such as Metro or a DC Circulator bus, wear a mask. Even if you’re waiting in a Metro station or at a bus terminal, wear a mask.

And, if you’re getting into a taxi or any other private transportation provider, you and the driver should be wearing masks.

The order also said that essential businesses must exclude customers and visitors who are not wearing a mask or face covering, except those customers who are exempt from wearing them.

Bowser told WTOP on Tuesday that D.C. would continue to take a methodical approach to reopening. “None of us would do ourselves any favors if we have given up seven, eight weeks of our lives just to be back here in November shut down,” she said.

Bowser said Washingtonians have told her that they appreciate that the city is following science and facts. “We have to be smart; we have to follow the science. We have to get ready to reopen,” she said.

Bowser expressed that her counterparts in Maryland and Virginia share her take on reopening.

“I was very happy to see the governor of Virginia ensure that the Northern Virginia counties that surround the District would be able to maintain a stay-at-home posture if those officials elect to do so,” Bowser said.

Bowser said Wednesday that the District is launching a pilot program for stores that sell educational and academic goods.

“Through this pilot, we will grant waivers to locally-owned stores in the city that sell educational items, such as books, for curbside and front-door pickup,” she said.

“The stores will need to agree to share data and information with us about their operations. We think it’s very important for our retailers, as well as regulators and D.C. government during this pilot phase, to learn important lessons about reopening while ensuring safe operations and safe interactions with their customers,” Bowser said.

Businesses can apply for waivers Friday.

The District reported 99 new cases of coronavirus Wednesday, bringing the total to 6,584.

Additionally, 14 new deaths were reported, for a total of 350.

D.C. has interactive maps online showing cases and deaths by ward and neighborhood. 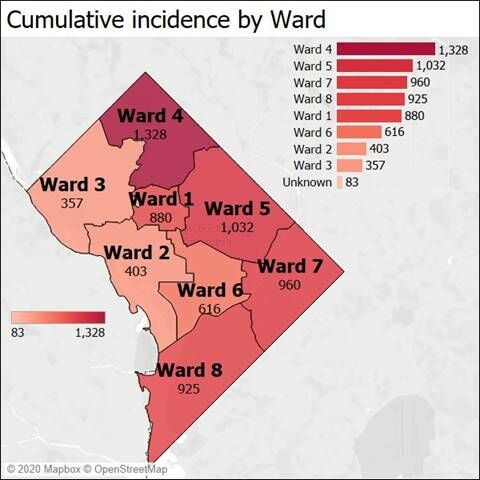 Hours after the District announced plans to extend its stay-at-home order through June 8, Mayor Muriel Bowser held a telephone town hall update on the city’s fight against COVID-19.

Several residents were able to ask questions about the extended stay-at-home order and what efforts will be made during the first phase of any reopening.

One resident wondered about whether any possible delays were planned for the city’s June 2 presidential primary.

Bowser doesn’t seem to be entertaining that option, reminding people that the District is putting extra emphasis on less in-person voting and more early ballot casting.

“There are 20 different vote centers all across the city where people can go and vote,” said Bowser.  “You don’t have to wait til June 2, and we encourage you to think about all of the other days before that, beginning next Friday, May 22, when if you don’t want to vote by mail, you may vote in person at those centers.”

Bowser was also asked if the District will conduct any additional city street cleaning to kickoff a reopening plan.

“We, of course, do street cleaning already on major corridors,” said Bowser.  “I will ask our [Department of Public Works] team to think about other corridors that can be added.”

Bowser also said that she expects her ReOpen DC Advisory Group to come back with recommendations next week.

WTOP’s Abigail Constantino and Ken Duffy contributed to this report.