Home » Anne Arundel County, MD News » How do you rescue…

How do you rescue someone from the trees when there’s a plane stuck above them? Very carefully

Officials continue to investigate the second small plane crash in the D.C. area in the last week. No one was seriously hurt, but this time, the rescue was a delicate.

The Federal Aviation Administration continues to investigate the second small plane crash in the D.C. region in the last week. Once again, no one was seriously hurt, but this time, the rescue was a delicate piece of work.

Around 6 p.m. Tuesday, the plane landed on top of some trees on Bald Eagle Drive, near Tipton Airport in the Laurel, Maryland, area. It hung above the firefighters and the two people on board as they worked.

Firefighters said the passenger, James Palazak, 59, of Columbia, Maryland, was about 30 feet up in the trees when they arrived, and that they were able to raise a ladder so he could climb down.

The pilot — Thomas Falk, 55, of Silver Spring — was about 50 feet up, though, and the plane was hanging above him. It took the rigging of ropes and harnesses to get him down — a specialized rescue performed by a team of firefighters in the special operations bureau who do this kind of thing more often than you probably think.

“Many times, they’re called out and used for utility workers, or people pruning or removing trees when they sustain an injury or have an equipment failure and they’re caught at a high elevation,” said Capt. Russ Davies, with the Anne Arundel County Fire Department. “They also perform rescues from structures like the Bay Bridge or some construction cranes.”

This time, there was a significant complexity with the plane. But Davies added that a couple of things worked in firefighters’ and Falk’s favor when it came to getting him down.

For one, the plane being stuck in the trees was still a concern, but firefighters believed it was stabilized enough to get Falk down safely.

From there, “the patient was able to assist in their own rescue,” Davies said. “It would have been a far more complex issue had the patient been more seriously injured, or they were entrapped or entangled in the aircraft.”

Instead, Falk suffered only minor injuries and was able to help firefighters get him down safely.

Last week, a small plane that had taken off from Freeway Airport, in Bowie, Maryland, struck a car on U.S. Route 50. Those on board walked away with minor injuries. 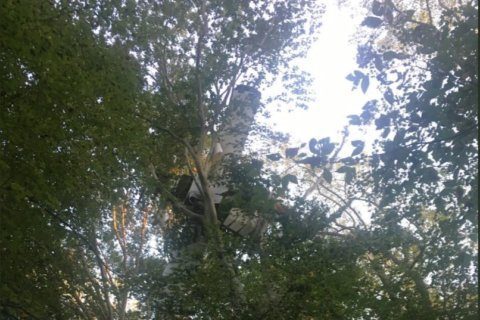 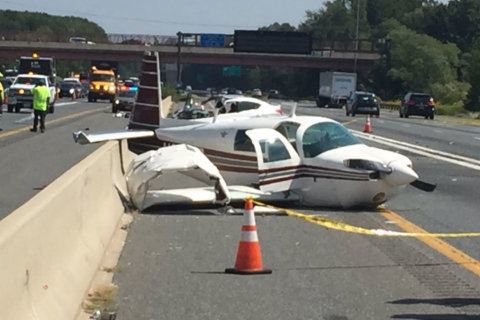 ‘Incredibly lucky’: No major injuries after small plane crashes into car, lands on US 50