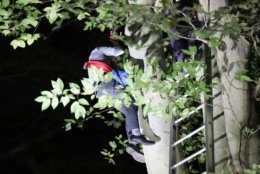 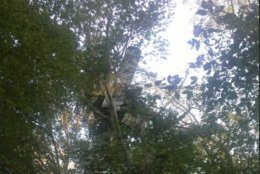 A small plane with two people inside went down Tuesday evening near Tipton Airport in Laurel, Maryland.

The plane went down in the woods off Bald Eagle Drive, Capt. Russ Davies with the Anne Arundel County Fire Department said. The call for the crash came in just after 6 p.m.

Two men were in the plane, which is was stuck 50 feet up in the trees.

Maryland State Police, which handled the investigation, identified the pilot as Thomas Falk, 55, of Silver Spring. The passenger is 59-year-old James Palazak, of Columbia.

One person was rescued using ground ladders, and the other was rescued by rope rescue teams from Anne Arundel and Howard counties; both are reported to have minor injuries, Anne Arundel County Fire Department said.

The plane is a Sonata Tampico. Maryland State Police said in a news release that preliminary investigation indicates that the plane may have had engine failure. They have notified the National Transportation Safety Board and the Federal Aviation Administration, which will be responsible for investigating the cause of the crash.

This is the second crash in five days involving a small plane in Maryland. Last week, a small plane that had just taken off from Freeway Airport in Bowie struck a car traveling along U.S. 50 and crash-landed on the highway. There were no major injuries reported.

Watch a video of the plane from CBS Baltimore.