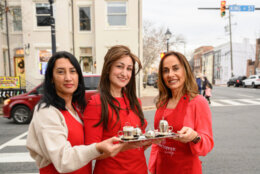 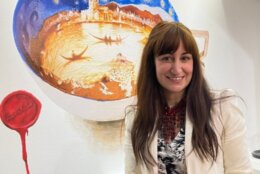 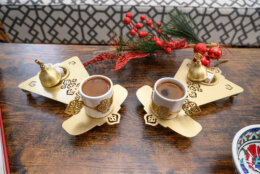 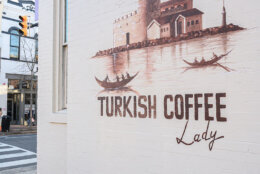 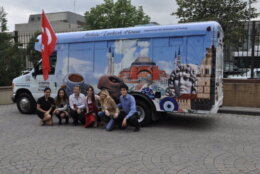 Coffee isn’t just about caffeine — it’s about culture, said Gizem Salcigil White, who has been working to introduce Americans to the ancient art of Turkish coffee for the last decade.

Area residents can now get a taste of those efforts at her newly opened coffee house in Old Town Alexandria, Virginia.

But it was a long and windy journey from Turkey to Old Town.

In the midst of starting a successful business, White, known as the Turkish Coffee Lady, battled an aggressive form of breast cancer shortly after having a baby and then saw the coronavirus pandemic shut down her store in Tysons.

But neither a personal health crisis nor a global one could slow her down — a drive she attributes to her passion for cultural diplomacy and her desire to be a role model for her daughter.

“First of all, being a mother was my strength,” White said of her now 5-year-old daughter, whom she joked is “in training” to be a future entrepreneur.

White also credits the community. “They told me not to give up,” she said. “And also, of course, I’m a very productive person. You know, if one door is closing, another door is opening up.”

That first door was actually on a truck that traveled across the U.S. and the world, with volunteers handing out thousands of cups of free Turkish coffee. In 2012, White created the Turkish Coffee Truck, which began by driving around area universities and other sites in D.C.

“I realized, you know, Americans love their morning coffee, and Turks have this 500-year-old coffee culture, so that was a very important communication tool to bring people together,” White told WTOP.

She began to receive attention from the media, including The Washington Post, Washingtonian and BBC — which dubbed her the Turkish Coffee Lady, a name she embraced — and was even recognized by Congress for fostering U.S.-Turkish friendship.

Her truck eventually traveled all along the East Coast and abroad to the Netherlands, Belgium, France and Canada.

“It was just such, you know, incredible feedback because people wanted to learn more about the culture, they wanted to taste the coffee, but it wasn’t accessible because you cannot really see Turkish coffee on menus, you cannot really drink it at the airport or a coffee shop or a restaurant or a hotel. So I realized, you know, this was my passion, and I wanted to educate audiences about my cultural heritage,” she said.

“That’s where I decided to build a small business, because I wanted to build something for my baby girl.”

The result was a brick-and-mortar store that opened in 2017 at Tysons Corner Center, “which was an instant success because it was like a community center,” White said. “People from all walks of life with diverse backgrounds, people who are familiar with the coffee or new to the coffee, they just wanted to get a cultural experience.”

Right after the store opened, though, White was diagnosed with breast cancer and forced to go to Turkey, where her family could help care for her daughter while she underwent chemotherapy and surgery.

All the while, her team kept the business in Tysons going. After six months, she returned to the U.S. for radiation therapy and began eyeing a second location at Dulles Airport.

But then came another health hurdle: the pandemic, which forced her to close the store in May 2020.

As a cancer survivor, White was in a high-risk category, which further limited what she could do during the COVID-19 lockdowns. So she adapted and pivoted her business model, launching online “coffee talks” with fellow women.

“So many women had to shut down their businesses, they had to quit their jobs, they had to stay home with their kids or home-school their children, so everybody was struggling in a different way. So I wanted to bring people together virtually,” she said.

Those online talks led to the Turkish Coffee Lady Foundation, which supports fellow women entrepreneurs and promotes gastro-diplomacy. White also started her own coffee line, which is offered through Walmart and other retailers, with each blend named after a heritage site in Turkey, such as Istanbul (traditional blend) and Cappadocia (cardamom flavor).

White then secured a federal grant from the Restaurant Revitalization Fund and looked for a location to open up another shop.

“And I found my dream … coffee shop in the heart of historic Old Town. It’s such a beautiful place,” White, who’s lived in Virginia since 2008, said. “And I wanted to build a culture house, not just the coffee shop — a place where, you know, cultures would meet, people would … savor the moments, just experience something new, something unique.”

Turkish coffee is certainly unique. In fact, it’s recognized as the world’s first coffee brewing method, which was introduced to Europe centuries ago.

“The first coffee house ever was opened in Istanbul in 1554,” White said. “There were 800 coffee houses alone in Istanbul in the 16th century, so coffee is such an important part for … our society, and of course it’s my pleasure to introduce this 500-year-old drink to new audiences.”

It’s not just about the drink; it’s a whole experience. Turkish coffee is unfiltered, which makes it “strong and flavorful,” White said, and is meant to be sipped from one side of the cup. This helps with the ritual of interpreting the leftover coffee grounds. White’s shop offers traditional coffee fortune readings, with proceeds going to her foundation.

The shop also offers pastries like baklava and vintage goods from Turkey, and features the work of artist Hasan Kale, who creates “micro scenes” out of coffee grounds.

The shop officially opened Jan. 22 at 1001 King Street with Alexandria Mayor Justin Wilson and other city officials at the ribbon-cutting.

“As a woman entrepreneur and a mother entrepreneur, it was so hard to, you know, stay strong until this moment,” White said.

But seeing lines of people excited to go into her shop “is just very rewarding.” D.C. Mayor Muriel Bowser has even declared Dec. 5 World Turkish Coffee Culture Day in The District.

“And I think this is the beauty of being a social entrepreneur. It’s not just about, you know, having a business or making money. It’s about connecting cultures … through cuisine, through arts,” White said. “And I’m, again, so proud of our team, my family, our community that we stuck together during these challenging times.”