Though we can still use more rain to make up our multiyear deficit, we are not going to get it this week. In fact, it looks like another preview of summer weather is on the way.
Listen now to WTOP News WTOP.com | Alexa | Google Home | WTOP App | 103.5 FM

WASHINGTON — Last week certainly ended on a soggy note with rainfall that was so desperately needed. We can still use more to make up our multiyear deficit, but we are not going to get it this week. In fact, it looks like another preview of summer weather is on the way.

This week’s culprit will be like the last ones we had in March and April: a “Bermuda High,” a ridge of high pressure centered near Bermuda where the circulation sets up a deep, southwesterly flow pumping in heat — and even some humidity — up from the South.

Before this becomes a Bermuda High, it is going to start out like any other nice, pleasant, comfortable high pressure center coming at us from central Canada. The last remnants of the deep area of low pressure over the Northeast that was related to our soaking rain pattern from last week will be lifting out, and Monday and Tuesday will both have some pleasant, seasonable, sunny conditions. That’s when we will be in the northwest flow, our area in the clockwise circulation of the high.

It’s Wednesday into Friday that the circulation on the west side of the high will be acting as a “heat pump,” bringing in the very warm conditions. As mentioned, it will also be somewhat humid, since the circulation will be tapping some moisture from the Gulf of Mexico.

In this pattern, most of the colder and wetter weather will be in the western part of the country, where the jet stream will be configured in a trough, or a dip. In between will be much storminess in the Plains and upper Midwest, areas that don’t need any rain right now.

Along with the heat and humidity, in this regime, the atmosphere will generally have a sinking motion, compression, which will inhibit storms from forming. As a result, we will stay mostly rain-free except for any thunderstorms from the Midwest that could sneak far enough east before falling apart.

It looks like a near perfect week for planning outdoor work and play activities, even though we will have to take it slow when it gets too hot. 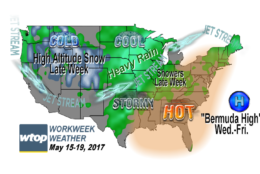 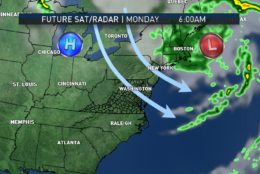 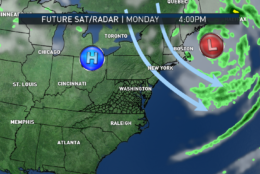 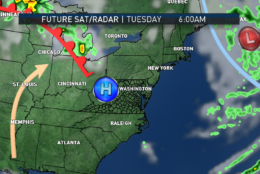 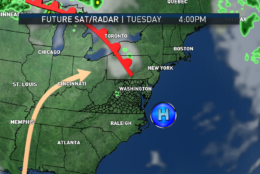 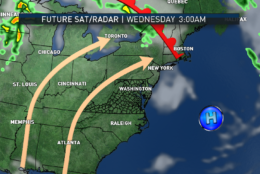 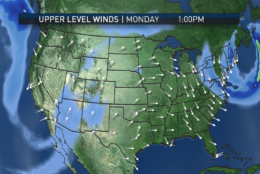 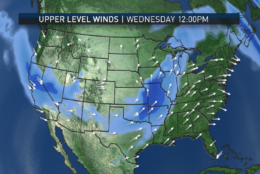 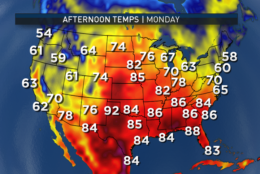 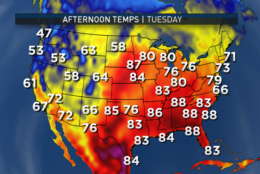 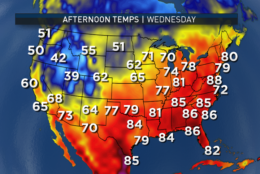 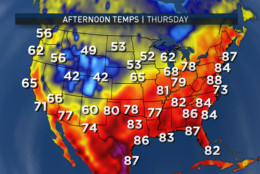 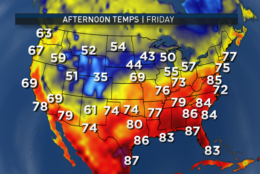 Of course, it is still early for this heat, so it won’t last. The pattern will break down and flatten out, allowing a cold front to sneak down from Canada toward the weekend with a chance for showers and more seasonable temperatures.

Speaking of last week’s rainfall, Reagan National Airport officially picked up 1.86 inches for the storms over the three-day period. That brings us well above average for the month, a bit above average since March 1 and just a bit below average for the year. There is still a deficit from last year to make up, but there have been positive results in the short-term (topsoil, brush, etc.) and the long-term drought effects (waterways). We are expecting good official news concerning the drought to be released this week.