Workweek weather: Stays cool, but still not much rain

Meteorologist Matt Ritter takes a look at the week ahead. Expect sunshine for a good part of the week.
(1/10) 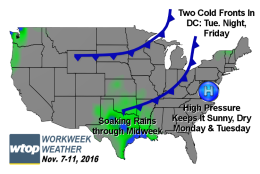 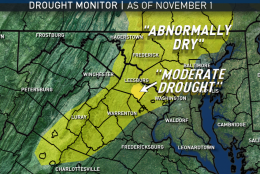 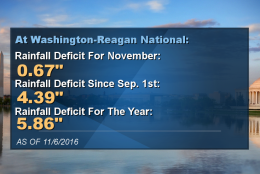 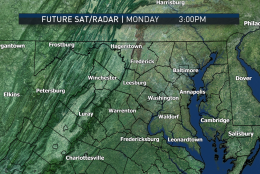 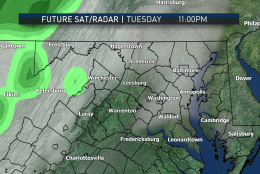 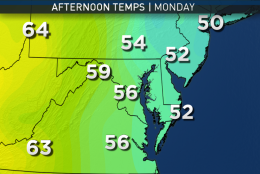 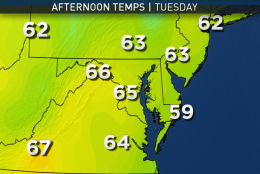 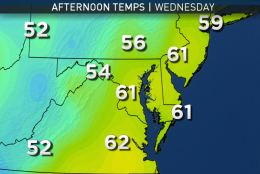 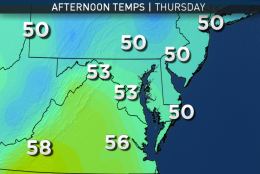 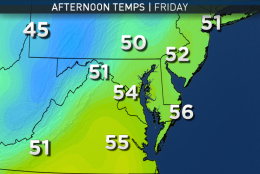 WASHINGTON — There’s been a subtle pattern shift across North America and the western Atlantic Ocean, which will keep us from getting the warm spells of the past several weeks (or at least not the summer-like warmth).

However, it doesn’t mean we will be getting any soaking rainfall — or snowfall, which, since it’s November, we now need to include in discussions.

We start off the week Monday morning with widespread frost and some freezing temperatures, enough to warrant the warnings and advisories posted, effectively ending the growing season along the Interstate 95 corridor. (Spots to the west are not included in the warnings because they’ve already had their first hard, killing freezes and frosts.) This is all courtesy of high pressure providing dry air, clear skies and calm winds. That high pressure center will stay with us for a couple of days as the pattern is blocked by a “cutoff” area of low pressure just out to sea.

The high will weaken and drift to our southwest Tuesday night after the polls close, allowing a cold front to approach us in fast flow aloft coming from central Canada. But only a modest amount of moisture will be available when the front taps some from a meandering disturbance over the deep South, one that will bring some spots of Texas and Louisiana substantial rainfall amounts.

Furthermore, it appears that in the direction the moisture would be coming in along the front, the mountains will “wring” a lot of it out in West Virginia, and we only end up with a few tenths of an inch at most through early Wednesday.

Then the next high pressure system from Canada takes over, drying us out again, quickly followed by another cold front Friday, also without much moisture. It is uncertain at this point what time of day the front will pass through on Friday, so it will be either a seasonably cool day if the front waits until the afternoon, or it will be a very chilly day with falling temperatures if the front goes through in the morning.

There are hopes for some soaking, cold rainfall in the change that will occur after this pattern, but it wouldn’t be until the middle of next week, if it does occur.

Now, about the rainfall deficit: Only a small fraction of the area is in an official “moderate drought,” a small area in southeast Loudoun County. But most of us are officially “abnormally dry.” That’s the first step. So far we’ve been lucky in that the numerical deficit from average has not resulted in actual effects on the springs and waterways in most areas. The immediate concern is topsoil and brush being too dry. Find more information on the “Drought Monitor” here.

THURSDAY
• Plenty of sunshine, but temperatures a little cooler than average