For most of us, this is a shortened workweek because Monday is a holiday, but it’s definitely part of the weather story.
Listen now to WTOP News WTOP.com | Alexa | Google Home | WTOP App | 103.5 FM
(1/6) 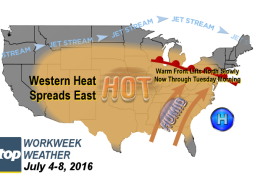 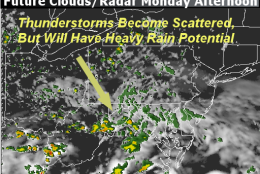 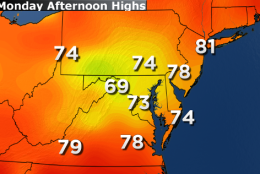 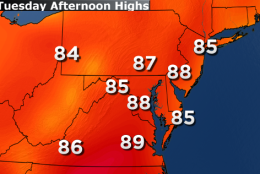 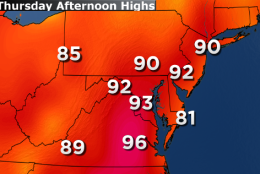 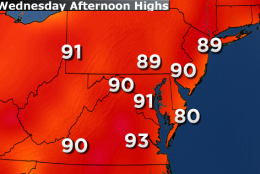 WASHINGTON — For most of us, this is a shortened workweek because Monday is a holiday, but it’s definitely part of the weather story.

A strong warm front will be moving through as part of a large-scale pattern shift across North America. Normally, meteorologists don’t talk about warm fronts being “strong,” but there are big differences in the building heat and humidity, and the simply warm and comfortable weather on the northern and eastern sides of the front, like the air mass that we had in place on Saturday.

That contrast itself drives strong winds aloft and creates several disturbances moving all the front, all of which mean chances for showers and thunderstorms, and some of those could have some heavy rainfall.

Unfortunately, timing disturbances like these are notoriously difficult. One thing’s for sure: The Fourth of July won’t be completely dry for most of us, and the threat of showers and thunderstorms could still be around for the back-to-work Tuesday morning rush. After that, the heat will be on.

For the past several weeks, the ridge of high pressure has been in the west, but now we’re going to be getting a piece of that as the jet stream winds head almost wholly north of the Canadian border. Once the new pattern is established, it will be hot and humid, and the humidity will make it feel even hotter. Heat index values will be close to 100, if not a little above. But the atmosphere will be “capped” and daytime heating alone will have to cause thunderstorms to form.

That means most of us will stay rain free and there will only be limited, isolated chances of thunderstorms (“garden variety”) in the late afternoon and evening. The chance may be a little higher on Friday itself with a very weak cold front approaching from the northwest.

Incidentally, we have had a heat wave already at Reagan National Airport. It was June 19-21, when the high temperatures were 90, 91 and then 91 again.

Editor’s note: The WTOP Workweek Weather Blog is intended as an in-depth yet plain language summary of the business week’s weather potential in the Washington, D.C., area along with an explanation of the contingencies and uncertainties that exist at the time of publication. For the latest actual Storm Team 4 Forecast, check out the WTOP weather page.