The D.C. area is bracing for another winter storm as the weekend rolls in. The forecast calls for snow that will transition to freezing rain on Sunday, and a state of emergency has been declared in Virginia.
Listen now to WTOP News WTOP.com | Alexa | Google Home | WTOP App | 103.5 FM

The National Weather service is urging D.C. area residents to take advantage of Saturday’s cold but dry weather to prepare for Sunday’s forecast which predicts snow that will transition to freezing rain in the afternoon. Here’s what you need to know.

Snow will start to move into the western and southern suburbs around noon Sunday, covering the entire region during the afternoon. The snow will give way to sleet, freezing rain and then rain Sunday night.

Snow will fall one to 3 inches per hour in the late afternoon and evening Sunday, making roads hard to navigate.

Other areas in the WTOP listening area that are under a Winter Storm Watch during the same time period include Carroll, Baltimore, Montgomery, Howard and Hartford counties in Maryland, Prince William, Manassas, Manassas Park, Fairfax, Arlington, Fauquier, Falls Church. Alexandria, Stafford and Spotsylvania counties in Virginia and D.C.

Though those counties are expected to have less snowfall with 2 to 4 inches predicted and 6 inches possible:

Wind gusts could reach 45 mph and ice accumulations of one-tenth of an inch are possible in those areas as well, according to NWS.

Rain is in the forecast for the majority of the region, which can knock down the amount of snow accumulating on the ground.

Some areas are expected to receive freezing rain, sleet or even more snow before the system leaves on Monday morning. Storm Team4 meteorologist Doug Kammerer said the ice could prove to be a bigger problem than the snow depending on how much accumulates.

Virginia Gov. Ralph Northam on Friday declared a state of emergency in the commonwealth because of the oncoming storm. It also allows the state’s emergency responders to prepare for the storm and move supplies and equipment where necessary.

Northam and state emergency officials talked Friday morning with Youngkin, who takes office Saturday, and his team. With the state of emergency in place, the governor-elect can respond to the storm as soon as he’s sworn in.

“I urge Virginians to take this storm seriously and make preparations now,” Northam said in a statement.

D.C., Maryland and Virginia have begun taking action before the snow arrives.

Road crews have applied anti-icing brine on roadways across the region, including Interstate 95. According to the Virginia Department of Transportation, the solution will prevent ice from bonding into the pavement during the storm, reducing the risk of hazardous road conditions while helping crews with snow and ice removal.

Once 2 or more inches of snow have accumulated, Virginia’s online snowplow tracker is activated, and users can monitor the status of roads, as well as where snow plows are working. Maryland has a similar interactive tool online.

“But when you’re in inclement weather, you need to take it down a notch,” Christian said. “So slow down. Remember the posted speed limits are for ideal weather conditions, which is what this storm is not.”

Christian recommended people drive at least 10 mph below the speed limit, use caution around snow plows and clear all snow off of vehicles before driving.

Drivers are also asked to avoid unnecessary travel, due to the possibility of dangerous weather and road conditions during and after the storm. VDOT encouraged college students to either arrive early to campus or delay their travel, as many start their spring semester next week.

Virginia’s electricity companies are also making preparations ahead of the weekend storm.

Casey Hollins, a spokesperson for Rappahannock Electric Cooperative, said the company has proactively staged workers around their service territory in anticipation of Sunday’s snow. The company website has a tool to report outages.

Dominion Energy will also have workers and contractors on standby for possible outages, according to Peggy Fox, a company spokesperson. Outages can be reported on the company’s app.

Sean Matthews, a spokesperson for PEPCO, said their crews are also prepping for snow in D.C., and Prince George’s and Montgomery counties in Maryland.

Matthew said outages can be reported online at the company’s website or by calling 877-PEPCO-62.

“If you do see an unsafe condition, whether it be a downed pole, or wire that’s come down, always treat that in that situation as if that wire is active and energized,” Matthews said. “Don’t touch it; stay away from it and give us a call.”

They’re also encouraging people to prepare any supplies needed for alternative heat sources, like wood for fireplaces or gas for generators.

SUNDAY: Snow developing around noon. Several inches of snow possible by sunset. Highs in the low to mid 30s.

SUNDAY NIGHT: Snow arriving in the early afternoon, heavy at times, with several inches in quick accumulations before evening. Snow will mix with freezing rain for several hours in the evening west of the U.S. 15 corridor then change to plain rain overnight with rising temperatures. Western areas will stay all snow. Temperatures rising into the mid 30s in the afternoon, rising further at night.

MONDAY: All rain and snow ending as flurries in the morning. Windy and turning colder. Morning high temperatures in the upper 30s. 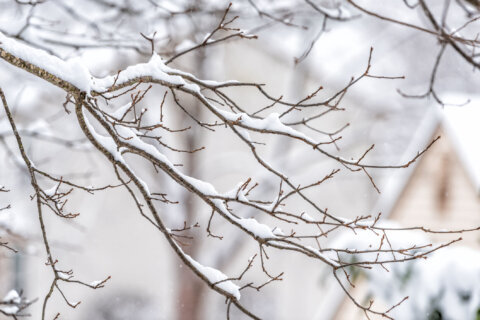