Holidays: 'Enchant' shines with millions of lights in Nats Park | Where to see holiday lights | Send in photos of decorations | How to give greener this season
Home » Weather News » Michael moves into mid-Atlantic;…

The National Weather Service said Michael will bring in around 1 to 2 inches of rain around D.C., with some localized areas receiving up to 2 to 4 inches on Thursday. Here's what you need to know.
Listen now to WTOP News WTOP.com | Alexa | Google Home | WTOP App | 103.5 FM

WASHINGTON — Yet again, commuters Thursday went through what has become an afternoon-commuting routine: Attempt to stay safe and dry amid a deluge. A flood warning is in effect until 3:15 a.m. Friday for several parts of Virginia, including Stafford, Spotsylvania, Prince William and southwestern Fairfax counties, and the city of Fredericksburg.

It’s also in effect for parts of Prince George’s and Charles counties in Maryland until 2 a.m. Friday.

In D.C., a coastal flooding advisory is in effect until 1 a.m. Friday.

The National Weather Service said Michael will bring in around 1 to 2 inches of rain around D.C., with some localized areas receiving up to 2 to 4 inches on Thursday.

Michael left behind “unimaginable destruction” in Florida’s panhandle after making landfall Wednesday. Supercharged by abnormally warm waters in the Gulf of Mexico the then-hurricane brought terrifying winds of 155 mph, splintering homes and submerging neighborhoods. It was the most powerful hurricane to hit the continental U.S. in nearly 50 years.

And while it’s expected to push out to sea around Norfolk and Virginia Beach, its remnants will likely take a toll on some parts of the mid-Atlantic.

Storm Team4 Meteorologist Amelia Draper said the rain will likely be heaviest east of Interstate 95 and around the Interstate 81 corridor Thursday as Michael combines with a cold front.

For areas closer to the tropical storm’s path — southern and central Virginia and the Carolinas, which are still recovering from Hurricane Florence’s epic flooding — Michael is forecast to bring about 4 to 6 inches of rain, with some areas seeing up to 10 inches. Draper said the tropical storm has maximum sustained winds of 60 mph, which will continue to diminish.

Those stout winds will be widespread.

Gusty winds are expected late this evening into early Friday as Michael pulls away and a cold front crosses the region. A wind advisory has been issued for parts of the area. Here are the expected peak wind gusts. The highest gusts are expected over the ridges and near the waters pic.twitter.com/iNY00i8YuW

“I want to urge all Virginians to prepare for the serious possibility of flash floods, tropical-storm-force winds, tornadoes and power outages,” Northam said in a statement.

The cold front is good news for parts of the area, as it’s pushing Michael off the coast.

The D.C. area will see much cooler air and temperatures into the low to mid-60s Friday as the cold front crosses the area.

Thursday night: Rain heavy in spots along and east of I-95, mainly before midnight; cloudy and cooler. Lows in 50s and low 60s.

Friday: Mostly to partly sunny. Breezy and much cooler. Highs in the low to mid-60s.

Sunday: Partly sunny and comfortably cool. Highs in the low to mid-60s. 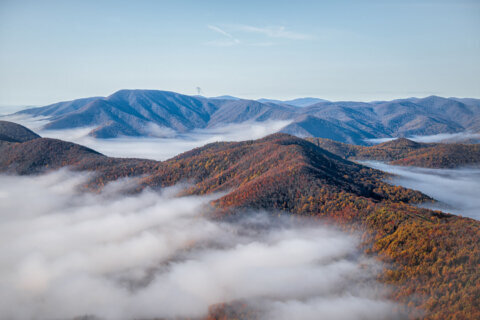