Scattered showers and thunderstorms will kick off the week, but the middle of the workweek will get more sun.
Listen now to WTOP News WTOP.com | Alexa | Google Home | WTOP App | 103.5 FM

WASHINGTON — The dry, comfortable weekend will already seem like a distant memory as people look for umbrellas to bring to work for Monday’s commutes.

Storm Team 4 will be tracking waves of showers and thunderstorms bringing soaking rainfall to the area. Some of it could be excessive, leading to some more flooding problems for the area’s small streams, creeks and roadways that have poor drainage.

The clusters of storms will move through in a few waves, so in any areas that get under the “train” of storms, the rainfall could be heavy. Since the ground conditions aren’t exactly that dry anymore, it won’t take as much rainfall in a certain period of time to cause drainage problems, so most of the area is under a Flash Flood Watch for Monday. As of this blog writing, the valid areas (which may change through the day) are in the above graphic.Follow the latest weather forecast at the WTOP Weather Center.

The weather will start improving on Tuesday, leading to a warm but pleasant midweek, followed by a chance for more rain for the end of the workweek. 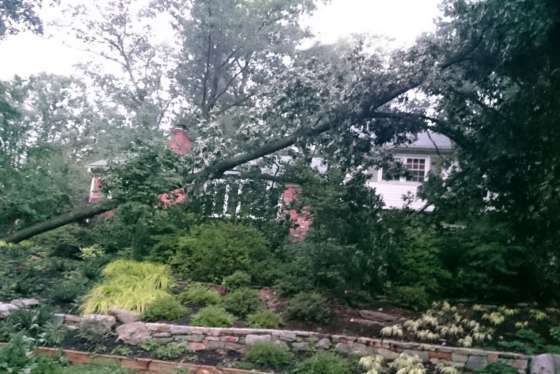 Here are some images from stories that happened last week, July 30-Aug. 5.

Basically, waves of low pressure will be drawing the cold front that passed through Friday back to the north as a warm front, bringing back more humidity which, of course, is the source for the atmosphere to lift and cause the showers and storms. At the surface, high pressure will be anchored over New England, providing us with northerly and easterly winds, preventing the front to make it through the entire area. It will be one of those scenarios where northern Maryland and mountainous areas could be significantly cooler than the D.C. region and southern areas — and temperatures look like they will be well below average everywhere.

The last wave of low pressure will swing through early Tuesday and take the front back to the south with it. High pressure will build in from the Midwest late Tuesday and Wednesday, leading to a drying trend. Humidity levels will also be dropping. However, because of how much rain will have fallen Monday, the low levels of the atmosphere won’t dry out as much as they could otherwise. Still, the humidity levels will just be the low end of the “sticky” range. The midweek’s temperatures will be back up to average levels in the mid to upper 80s.

The high pressure system will head out to sea for the end of the workweek, allowing for another system to encroach on us Friday — if not Thursday evening — with another chance of rain.

The Nationals are finally back in town this week and have games scheduled every evening. At this point, it looks like Monday’s game may be impacted by the storms and so could Friday’s.

Monday’s rainfall could be a record for the D.C. area, if the “train” of storms heads directly over Reagan National Airport. The record way predates the airport’s days: 1.85 inches set in 1885. 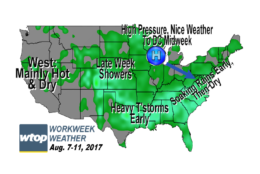 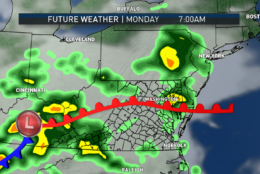 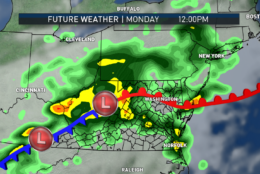 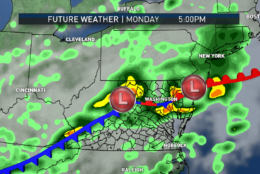 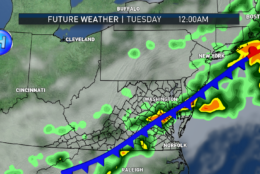 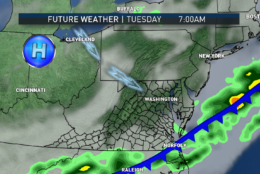 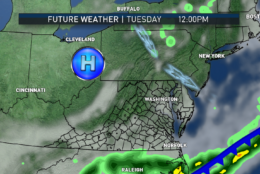 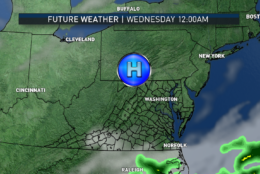 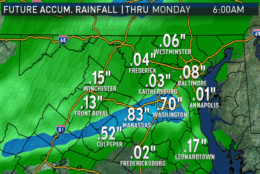 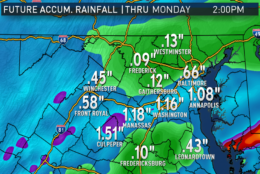 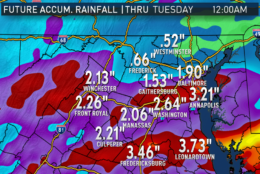 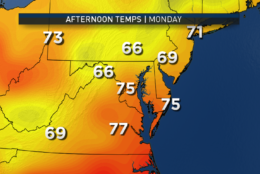 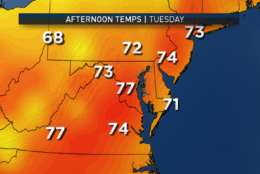 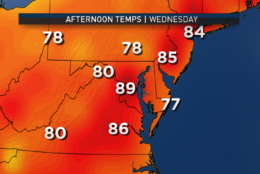 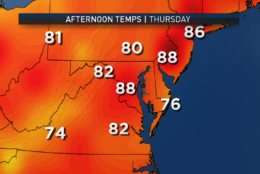 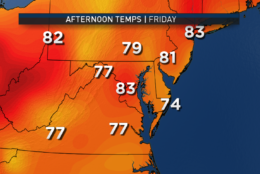 MONDAY
• Bands of showers/thunderstorms already scattered around the area at the start of the day
• Damp, muggy and overcast all day
• Afternoon rain, heavy at times, with some strong or severe thunderstorms, especially south of D.C.
• Evening commute could be much slower than usual

WEDNESDAY
• Lots of sunshine
• Very warm, but seasonably so
• Some humidity but not oppressive at all

THURSDAY
• Sun fading behind increasing clouds toward evening
• Showers possibly arriving as early as late evening, but if not, definitely Friday

FRIDAY
• Cloudy and not as warm, but definitely more humid
• Rain and some thunderstorms

Editor’s Note: The WTOP Workweek Weather Blog is intended as an in-depth yet plain language summary of the business week’s weather potential in the D.C. area along with an explanation of the contingencies and uncertainties that exist at the time of publication. For the latest actual Storm Team 4 forecast, check out the link on the main WTOP Weather Page. 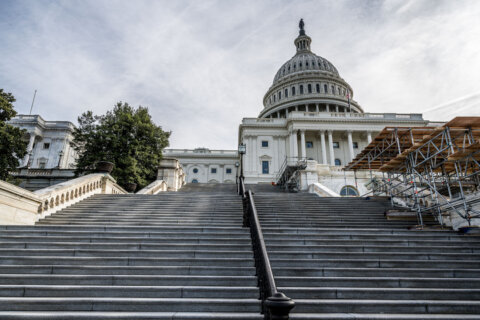