After pounding the D.C. area Friday, there's no relief in sight heading into Saturday. Widespread rain of 1 to 3 inches is likely, but some areas might see more. Here's what you need to know.
Listen now to WTOP News WTOP.com | Alexa | Google Home | WTOP App | 103.5 FM

WASHINGTON — There is no relief in sight for the D.C. area Friday night when it comes to potentially dangerous rain.

Waves of heavy rain led to a series of flash flood warnings in some areas on Friday. The rain was so bad that it also postponed Friday night’s Mystics game (due to a leak at Verizon Center) and kept NBC Washington from having an 11 p.m. newscast.

The entire region remains under a flash flood watch until Saturday afternoon (see below). Even heavier rainfall is expected later Friday evening and during the overnight hours.

Heavy rains continue throughout the night. The area can expect between 2 and 5 inches of total rainfall. Areas such as Gaithersburg, Maryland have already seen 4 inches of rain throughout the day.

The first wave of showers sparked flooding on some area roadways and reports of some water rescues. Montgomery County Fire and Rescue Service said in a tweet late Friday morning that crews responded to reports of multiple reports of vehicles in high water in the Wheaton, Maryland, area.

There were also numerous reports of high-standing water on other area roadways, including parts of Perry Parkway in Gaithersburg. Parts of Beach Drive, Kensington Parkway and other roadways were closed because of flooding.

Get the latest traffic and road conditions on WTOP’s Traffic page. 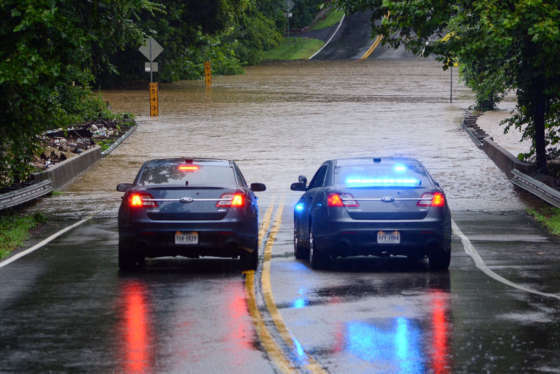 The D.C. area has been under a flash flood watch for most of Friday afternoon and the severe weather is expected to continue through Saturday.

The rain — including pockets of scattered thunderstorms — is expected to intensify through the night.

The Storm Team4 forecast indicates rainfall rates of over 1 inch per hour are possible for several hours in a row.

This could again lead to dangerous travel conditions, with high standing water on roads and moderate-to-severe flash flooding in flood-prone areas. The fact that the heaviest rain will be coming overnight only increases the risk.

Winds are expected to increase as the storm heads for the coast and intensifies.

As always, do not risk driving on water-covered roads. If you must travel Friday night, use extreme caution.

This is a potentially life-threatening event. 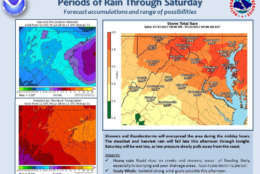 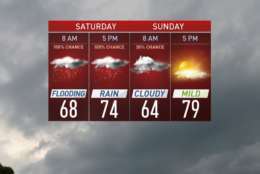 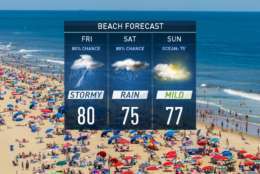 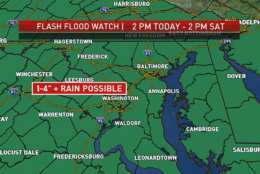 The National Weather Service has issued a Flash Flood Watch until Saturday afternoon for the following WTOP locations:

Weekend forecast and beyond

Meteorologists predict the WTOP listening area could see as much as 3 inches Friday into Saturday, though some parts of the region could get 4 to 6 inches. The heaviest rain on Saturday will fall before noon, but periods of moderate rain are likely to continue throughout the afternoon and well into the evening.

Much like in a winter storm, the higher precipitation amounts appear most likely from the D.C. metro area up Interstate 270 and out along Interstate 66.

North winds between 15 and 30 mph are expected Saturday afternoon.

It’s believed that most, if not all, of the rain will be over by early Sunday, and highs will be 75–80.

Monday through Thursday of next week will be mild and dry, with temperatures trending back toward the average of 87/70.

There have been a number of reports of roads being flooded and closed throughout the course of Friday afternoon.

Keep in mind the weather conditions as you plan your commute. Visit WTOP’s traffic page for the latest updates, follow WTOP on Twitter @WTOPtraffic, and listen to live traffic reports every 10 minutes on 103.5 FM or via our online stream.