The Washington Nationals returned to the field at Nationals Park for the first time since the World Series in October for summer camp workouts.
Listen now to WTOP News WTOP.com | Alexa | Google Home | WTOP App | 103.5 FM
(1/5) 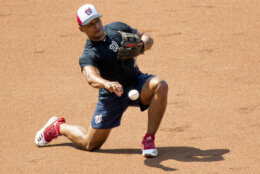 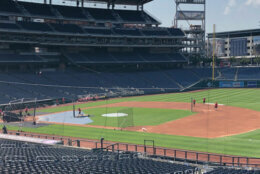 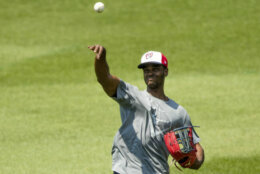 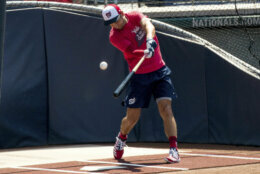 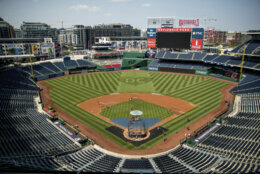 This should have been the biggest weekend of the baseball season for the Washington Nationals – a rematch with the Houston Astros – the team they beat in the World Series.

It was also supposed to be the return of former manager Dusty Baker, now Houston’s manager.

Fans would have also had the opportunity to let the Astros know how they felt about their sign-stealing scandal.

Instead, there will be no games and no fans.

Half the season has already been wiped out, but Major League Baseball said if they can keep COVID-19 at bay, they’ll try and play 60 games.

With that hope in mind, Washington returned to the field at Nationals Park for the first time since the World Series in October.

They have three weeks to get ready for their first game of an abridged and different season.

You can call it Spring Training 2.0 or Summer Camp, but either way, manager Dave Martinez knows they don’t have much time to get ready.

“A lot of guys look good, really good,” Martinez said. “These guys are here, and they’re ready. They understand what we’re trying to do, and they understand that they have to do it quickly.

“It’s not something that you build up gradually. We have to come out, and we have to be ready to go,” Martinez said.

General manager Mike Rizzo said he liked what he saw from his veteran team in their first training day, considering the layoff from their last day in spring training.

“Tip of the hat to Davey and the coaches who stayed on the players,” Rizzo said. “We stayed in constant contact with all players that were considered in our 60-man roster.”

Conditioning is one thing, but observing safety protocols will eventually prove more important.

Before they started workouts, the whole team was tested, then quarantined for 48 hours until they were cleared.

However, Martinez said it is his players’ and staff’s actions after testing, practicing and game days that will be different as they adjust to new routines.

“You can’t just leave the ballpark and go to a restaurant and go out,” Martinez said. “You got to really focus on your teammates and what we’re trying to do here. And that’s to keep everybody safe.”

Rizzo also said that, in his opinion, the safest teams will end up becoming the best teams in this condensed season. It will be pressed upon the players to maintain their safety outside the stadium and that will be done as a team effort.

“If we want to win, we have to stay together,” Rizzo said. “No going out, stay as safe as you can in those hotels, and give ourselves the best chance to keep a safe roster, a healthy roster. If we do that, we’ll have as good a chance as anybody winning.”

It will be nine months since winning the World Series. Martinez said he cannot wait to defend their championship that he does not plan to be defeated by a virus and will try his best to be as safe as possible.

“I didn’t spend three months isolated on a farm to come here and get sick,” Martinez said. “I want to make sure I keep myself safe, so I can keep the coaching staff safe, the players safe, and everyone else around me.”