Festooned in red team gear from caps, to team jerseys, Washington Nationals fans enjoyed a springlike day at the ballpark, Saturday, getting autographs and posing for pictures with their baseball heroes — the World Series Champion Washington Nationals.

Many families with children were among the die-hard fans who turned out.

“I think it’s amazing. I’ve loved the Nats forever, there’s video of me when I was 5 years old screaming about how I love the Nats and it’s great being here,” said Bridget McNally, 13, of Leesburg, Va. 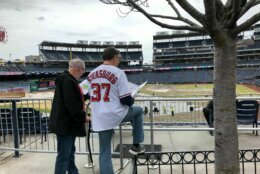 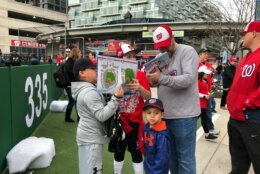 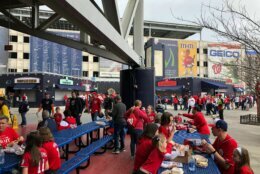 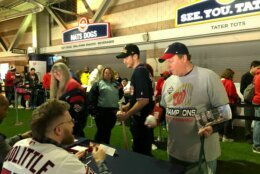 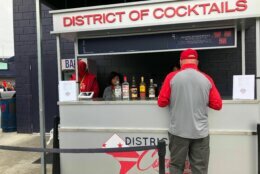 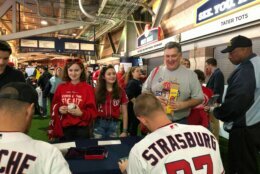 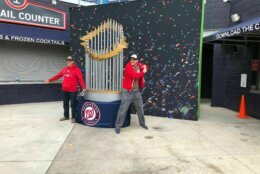 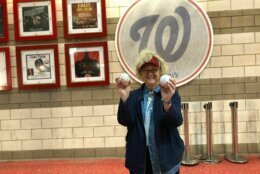 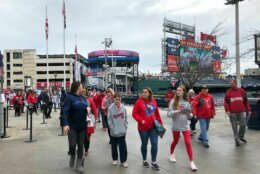 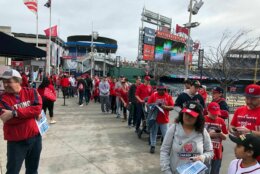 The balmy 70 degree weather in D.C. was similar to West Palm Beach, Florida, where the Nationals start Spring Training in less than five weeks. San Diego native Stephen Strasburg, who has a home in Northern Virginia, now appreciates the huge impact their victory has had on the DMV.

“There’s a lot of people who’ve approached me in random places and just wanted to shake my hand and say thank you. It’s a team effort and a great accomplishment to win a World Series, but I think especially doing it in a city like this is extra special,” Strasburg said.

The last time we saw Max Scherzer, he was gutting out five innings in Game 7 against the Astros, while dealing with a stiff neck. He said he’s feeling really good right now, throwing, running and doing everything he needs to while training in Florida.

“Coming back up here, this is the reason why we play the game, to win the World Series. Getting to relive it with all the fans and all the emotions, that just gives you the motivation to go back down there and keep training,” Scherzer said.

Fans had the chance to tour the clubhouse and hit in batting cages. There were also numerous photo opportunities with players.

A long line of fans stretched along the concourse from center field to left field to pose for pictures with center fielder Victor Robles, Juan Soto, who plays left field and a large replica of the Commissioner’s Trophy.

“It was really cool to be able to take a picture with him today,” said Mark Altman, 17, a senior at Potomac Falls High School, about his photo op with Juan Soto. “Ever since he came here, I’ve been a fan of his,” Altman said.

Speaking of Juan Soto, he even took to the mound to pitch a few heaters for his younger brother, Elian Soto, who had no problem hitting them deep.

Not only did Elian do the Soto Shuffle…

Nationals players and fans said it would be nice to have “The Z-Man” return.

Ryan Zimmerman is the only player unsigned, but GM Mike Rizzo seemed to indicate that situation may be resolved soon.

“I had a great conversation with Zim. He was in my office earlier this week and we talked for about an hour and a half and love him,” he said.

Rizzo adds “we’re not going to discuss it, but someday there will be a statue with his likeness on it here in centerfield and we’d love for him to end his career here in Washington.”

However, Trea Turner hopes it’s not anytime soon. He can’t fathom the team without Zimmerman.

“We lost Bryce (Harper), we lost Tony (Rendon), we lost J-Dub (Jayson Werth). Quite a few people since I’ve been here that are kind of cornerstone guys that we’ve moved on without which isn’t always fun. But, Zim is Mr. National, The President and all the nicknames, just a great person and a great human being. So, hopefully he signs soon. That would be great. But, sometimes it’s a business.”

Concession venues were open including Ben’s Chili Bowl and La Casita Pupuseria and fans could be seen having lunch at picnic tables overlooking left field.

Saturday’s Winterfest was sold out. On Sunday, the gates to Winterfest will open at 10 a.m. for Nats Plus members and at noon for the general public. The event is scheduled to run until 4 p.m. on Sunday.