Coronavirus News: Fairfax Co. votes to increase substitute teacher pay | Is it time to get a COVID-19 booster? Which one? | Local cases of COVID-19 | How many in DC region are vaccinated?
Home » Washington Football » 10 former WFT workers…

The Washington Football Team was fined $10 million, and owner Dan Snyder stepped aside, after what the NFL called a “workplace review” by lawyer Beth Wilkinson over the summer. But her report, about allegations of workplace harassment of women employees, has never been made public.
Listen now to WTOP News WTOP.com | Alexa | Google Home | WTOP App | 103.5 FM

Ten former workers for the Washington Football Team are asking the NFL’s top sponsors to pressure the league to release a report on the culture of the team.

The team was fined $10 million, and owner Dan Snyder stepped aside, after what the NFL called a “workplace review” by lawyer Beth Wilkinson over the summer. But her report, about allegations of workplace harassment of women employees, has never been made public.

“We have every reason to believe that Ms. Wilkinson and her team did an exhaustive, competent investigation, and that she had every intention of issuing a written report of her findings,” the letter said.

The release of emails from that investigation, written by former Las Vegas Raiders coach Jon Gruden to Bruce Allen, the president of what became the Washington Football Team, led to the coach’s resignation earlier this week.

In a statement, lawyers for the 10 former workers said, “It is unacceptable that the only person to be held accountable since the completion of the WFT investigation is the coach of a different team, while the WFT and its owner escaped with only a fine after decades of documented harassment and abuse at every level of the organization.”

While the team was fined and Snyder suspended, he transferred control of the team to his wife, Tanya. The former workers point out in the letter that he was then allowed to buy out his partners, taking total control of the Washington team, “allowing him to emerge from this scandal stronger than before.”

The letter calls on the CEOs of Verizon, Anheuser-Busch, Amazon, PepsiCo, Nike and Procter & Gamble, as corporate citizens and sponsors of the NFL, who ostensibly care about ensuring a workplace for women that is free from harassment and abuse, to “demand transparency from the League related to this scandal.”

You can read the letter online. 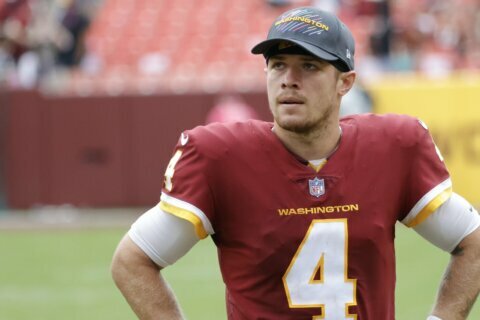