Coronavirus News: Fairfax Co. votes to increase substitute teacher pay | Is it time to get a COVID-19 booster? Which one? | Local cases of COVID-19 | How many in DC region are vaccinated?
Home » Washington Capitals » 2018 Capitals, 10 others…

Ten individuals and one team made their mark in the sports world. On Sunday at National’s Park, they came together to become the 2019 inductees to the DC Sports Hall of Fame. See photos and videos.
Listen now to WTOP News WTOP.com | Alexa | Google Home | WTOP App | 103.5 FM

Whether its swimming in the Olympics, helping the Redskins win the Super Bowl in 1992 or hoisting the Stanley Cup, 10 individuals and one team made their mark in the sports world. On Sunday at National’s Park, they came together to become the 2019 inductees to the DC Sports Hall of Fame.

“This is pretty cool,” said former defensive end Charles Mann, whose name will now show up on a big board at Nationals Park. Mann showed up to the ceremony wearing the ring he got for helping the Skins defeat the Buffalo Bills in Super Bowl XXVI.

Mann who played in ’80s and ’90s reminisced about his career with the team, saying each time his wife was pregnant the Redskins won a Super Bowl.

“No, I can’t go back and make her pregnant now, “ Mann joked.

Also honored was Arlington, Virginia-native Tom Dolan, who in 1996 and 2000 brought home gold medals while representing the U.S. in the Olympics.

“Having grown up in the DMV, its pretty amazing to be a part of this class, today,” Dolan said.

Cathy Reese, who helped lead the University of Maryland’s women’s lacrosse to victory in the NCAA Championship, including a title win this year, was a further inductee.

“It’s definitely a special honor, and I think its great for the DC Sports Hall of Fame to recognize lacrosse on this platform,” Reese said.

Resse was joined in this year’s class of inductees by Maryland colleague Sasho Cirovski, who lead the men’s soccer team to three NCAA titles.

“It’s a great honor that I was selected to be a part of this group, a lot of great names up there and I’m humbled by it,” Ferry said.

Also added to the list was Andrew Beyer who covered horse racing for The Washington Post, Tim Brown who played for both the Washington Senators and Washington Redskins, and the Skin’s first coach, the late Ray Flaherty.

The man who brought D.C. United to town, Kevin Payne, was also among those honored and so was the late tennis great and longtime fixture of D.C.’s tennis community Allie Ritzenberg.

For the first time, a team was honored as well. And it was no surprise what team that would be. The 2017-2018 Stanley Cup winning Washington Capitals are now in the DC Hall of Fame; the plaque was accepted by team owner Ted Leonsis.

“We’re really flattered and honored to be the first team, which has been inducted into this Hall of fame,” Leonsis said.

Each honoree will have their names added to the Hall of Fame display at Nationals Park. 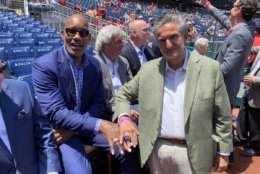 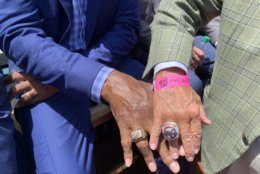 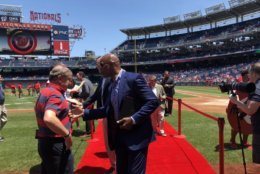 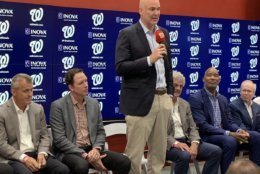 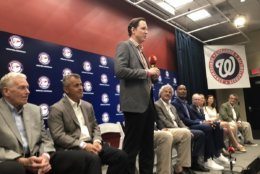