The four suspects were arrested hours after the shooting Tuesday night in Warrenton, Virginia, when the car they fled in was involved in a crash.
Listen now to WTOP News WTOP.com | Alexa | Google Home | WTOP App | 103.5 FM

Two men and two teens have been charged in the shooting at a Walmart parking lot Tuesday night in Warrenton, Virginia, that wounded two people and triggered an hourslong manhunt in Fauquier County.

The four suspects were arrested hours after the shooting when the car they fled in was involved in a crash. Authorities have characterized the shooting as a drug deal gone bad.

The four suspects in the shooting are 18-year-old Deonte Tyrone Clayton-Warren and 20-year-old Jordan McKinley Washington, both of Stafford, Virginia, along with a 16-year-old boy and a 17-year-old boy who have not been identified.

The four have been charged with felony malicious wounding, shooting into an occupied vehicle and the use of a firearm in the commission of a felony. All are being held without bond.

The sheriff’s office said the four suspects had driven to the Walmart on James Madison Highway in Warrenton from the Stafford/Fredericksburg area to buy marijuana.

However, shortly after 5 p.m., there was some kind of argument, and authorities said Clayton-Warren fired into another car, striking a 20-year-old man and an 18-year-old woman.

The victims drove to a Home Depot across the street, called 911 and were taken to a hospital. They were treated for their injuries and released.

The sheriff’s office said the four shooting suspects fled the parking lot in a white Acura.

Then, about a half-hour after the shooting, the suspects’ car ran a stop sign at the intersection of Ritchie and Elk Run roads and was struck by another car, authorities said. Witnesses saw the four suspects jump out of the car and take off on foot after the crash.

“The description of those individuals and the description of the car that was involved at the crash led us to believe early on that it may be connected,” Sgt. James Hartman, a Fauquier County Sheriff’s Office spokesman, told WTOP.

“However, we had to, obviously, investigate that and then at some point during the investigation, they determined that these were, in fact, the individuals involved in the shooting at Walmart, so the search took on a different meaning at that point,” Hartman said.

Two of the suspects were located hiding in a wooded area and a shed shortly after 7 p.m. and arrested.

However, it took several hours for authorities to track down the remaining two suspects. They were arrested shortly after midnight. At one point during the search, nearby residents were told to shelter in place. 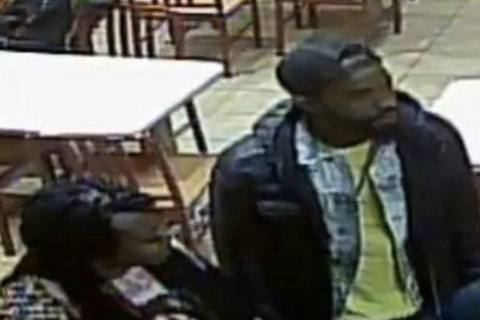