University of Mary Washington political analyst Stephen Farnsworth told WTOP on Wednesday, “This was really an extraordinary rebuke of Donald Trump. … This was well beyond what even the optimistic Democrats were predicting a couple days ago.”

Voters wanted to send a message, by Farnsworth’s analysis.

“Donald Trump was unpopular in Virginia, and that really hurt the Gillespie campaign… The reality is, the Gillespie campaign went all in on a Trump-style message when you look at the attack ads that focused on MS-13, the questions of immigration, the Confederate monuments controversy,” Farnsworth said. “No doubt about it, he campaigned like Donald Trump and was punished by the voters of Virginia for doing so.”

“The issues that Democrats were most concerned about going into this election was the idea that the 2017 electorate wouldn’t look a lot like 2016 electorate,” he said.

“Normally, in a gubernatorial election, you see a decline in the percentage of the population that is younger and that is African-American participating … compared to the presidential election a year earlier,” Farnsworth said. “But the exit poll numbers show that young people were committed to this election, that African-Americans were committed to this election.”

When asked about Republicans and the 2018 midterm elections, Farnsworth didn’t paint an optimistic picture for the GOP.

“My guess is that the results last night will suggest for a number of Republicans that 2018 won’t be a good year for the party. So I think that Republicans are likely to suffer from candidate recruitment, and candidate retirements, and that’s bad news for Republican efforts to try to keep the House,” he said.

“I think a message that came out of that is, it paid off, in Virginia, to run hard against President Trump,” he told WTOP on Wednesday.

The disapproval rate of President Trump in Virginia was so high that it didn’t matter who the Democratic candidate was, Schneider said.

“[Donald Trump] really seems to have motivated voters to come out and make a statement against him,” he said. “And even some who were less clear on who the Democrats were — as long as they had the D by their name, a lot of people said they were going to come out and vote to send a message.”

The large Democratic-voting turnout was mostly focused in northern Virginia, demonstrating a large divide in the state and possibly explaining why Virginia has sometimes turned purple. The more rural areas favored Gillespie, and Schneider points to economic disparity in those regions to explain why.

“Those parts of the state that Gillespie won look very different economically from the more urban areas that Northam won,” Schneider said. “They’ve got some long-term structural problems in trying to find new industries and jobs for people. And until somebody can figure out how to spread the recovery all around the state more evenly, it’s probably always going to be kind of a tale of disparity.”

Geoff Skelley, Sabato’s Crystal Ball associate editor at the University of Virginia, discussed voter turnout as a major factor in Democratic wins, noting that 47 percent of registered voters came out.

But he also noted the Democratic wins in the House of Delegates had to be “chalked up to Trump.”

On Wednesday, Skelley told WTOP that Trump’s claims that Gillespie failed to win because Gillespie didn’t “embrace” Trump enough was well within the Republican debate.

“You saw Breitbart News, for example, after the election, going after Gillespie for being too establishment,” Skelley said. “We talked throughout the campaign about how Gillespie was sort of straddling; one foot he had in the Trump camp and he was using a similar approach in his advertising, but at the same time, he was also using some of his more traditional messaging to try turn out Republicans. And it apparently didn’t work.”

Bruce DePuyt, a longtime political reporter on Virginia elections, said it doesn’t matter what the White House has to say about yesterday’s voting.

“Everyone gets what this was. Think of just the turnout numbers for just a second. … You had just more than 2 million people — almost identical numbers — [in] the last two gubernatorial races. Last night, nearly 2.8 million Virginia voters turned out to the polls. … That is a surge of interest,” he said.

DePuyt explained that voter turnout was in direct correlation to animosity towards Trump and his administration.

“Anger is a tremendous motivator, and I think people on the left are nursing … a lot of anger going back 12 months,” he said.

The many wins in the House of Delegates for Democrats alone speaks volumes to the left’s anger.

Depuyt said, “This speaks to the intensity level. There were people who didn’t vote in 2016, who have been kicking themselves ever since. There are people who are watching what’s going on in the world right now, with the mass shootings and efforts to go after peoples’ health care. And the one thing people can do is vote. And clearly, Virginia voters woke up yesterday determined to take advantage of that sometimes small-seeming opportunity.” 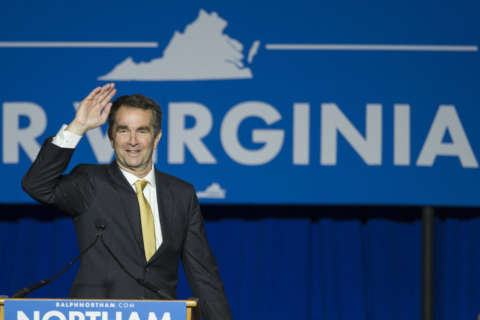 See how each county voted in the 2017 Virginia governor's race