Control of Virginia’s House of Delegates remains up for grabs the day following big Democratic pickups, and the final makeup of the chamber is unlikely to be decided for weeks.
Listen now to WTOP News WTOP.com | Alexa | Google Home | WTOP App | 103.5 FM

WASHINGTON — Control of Virginia’s House of Delegates remains up for grabs the day following big Democratic pickups, and the final makeup of the chamber is unlikely to be decided for weeks.

Late Wednesday, Virginia House Republicans claimed they had won at least a 51-49 majority in the House with narrow victories by Caucus Chairman Tim Hugo in Northern Virginia and Del. David Yancey in Newport News, but a number of races are likely headed for recounts and some provisional ballots have yet to be counted.

A total of five races have a margin at or around 1 percent, the threshold which allows for a recount under Virginia law. Each of those seats had been held by a Republican, so Democrats could evenly divide or take control of the House by winning two or three of those seats.

Two of those races are in Northern Virginia — outgoing Republican House Speaker Bill Howell’s seat in Stafford and Fredericksburg, and Del. Tim Hugo’s seat in Fairfax and Prince William Counties.

Initial double-checking of the vote count and math in Fairfax County’s portion of Hugo’s 40th House District moved him Wednesday afternoon from trailing Democrat Donte Tanner by fewer than 100 votes to leading by 115. The canvass continues through Monday, including the consideration of the 36 provisional ballots in the race in Fairfax County and 12 more in Prince William County.

Stafford County Registrar Greg Riddlemoser said the initial canvass there did not change any results. Countywide, Stafford has 50 provisional ballots that could be counted if those voters provide additional information like a photo identification by noon Monday.

As Republican and Democratic legal teams battle over ballots, and prepare for likely recounts in coming weeks, House Democratic leaders are celebrating the significant gains that have been confirmed thanks in large part to an increase in Democratic turnout over a typical governor’s race year.

“It will just be a very different atmosphere [in Richmond],” Del. David Toscano of Charlottesville said Wednesday.

He goes from the minority leader in the House of Delegates, facing a 66-34 Republican majority, to possibly becoming speaker.

“A 50-50 split would probably generate some kind of power-sharing arrangement where you have a sharing of committee chairs,” Toscano said Wednesday.

Any formal negotiations would begin after the election results are finalized.

“Hopefully we can get to 51 and we won’t have to struggle with power sharing quite that way,” Toscano said, although the party did not believe that outcome was at all likely when the night began.

If Democrats do manage to take control, Toscano said Democratic control of committees would mean even more significant changes in what gets through the House.

“But to be sure, there is no doubt the dynamic is going to change dramatically this January,” Toscano said.

“First of all, you get a lot closer to doing Medicaid expansion. If you’re 52-48, you only have to swing a couple votes of people in districts where their constituents are really affected by the lack of expansion … There’ll be a number of other coalitions you can build around family leave or minimum wage increases,” Toscano said.

He said he also believes fewer bills from the most conservative wing of the Republican party will make it to the House floor.

In a statement late Tuesday night, House Republicans said Tuesday “was a difficult night, and the outcome is not what anyone expected.”

“Our team is closely monitoring the canvasses … as we await the official results,” House Republican Caucus spokesman Matt Moran wrote in the statement.

Republican Party of Virginia Chairman John Whitbeck told supporters Wednesday that key factors in the Democratic landslide were a lack of action on Capitol Hill on health care, and the heavy tilt toward Democrats by voters under age 45 and among minority groups.

“I will be blunt: last night was a terrible night for our Party,” Whitbeck wrote in an email. “We must quickly regroup and prepare for next year.”

In addition to the raw number of seats Democrats flipped from red to blue — which appears to be at least 14 — party leaders are also celebrating the new delegates-elect who will take office in January.

At least nine of the new delegates are women. (Republicans did not flip any Democratic-held seats.)

“That’s a huge pickup of women, we have two Asian-American women, Kelly Fowler and Kathy Tran, two Latinas, Elizabeth Guzman and Hala Ayala, we have our first transgender woman, our first lesbian woman. It is remarkable, and we’re bringing diversity to that chamber,” Democratic Caucus Chair Charnielle Herring of Alexandria said Wednesday.

In the 68th District, incumbent Republican Manoli Loupassi conceded to Dawn Adams, who would be a tenth new Democratic female delegate and the first openly lesbian, but Adams leads by only 326 votes so the race could still go to a recount.

Herring credited Democratic outrage over President Donald Trump’s election, and the spark of the Women’s March on Washington, for helping get the candidates on the ballot and driving turnout. 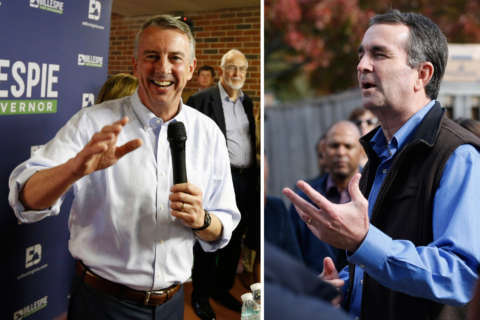 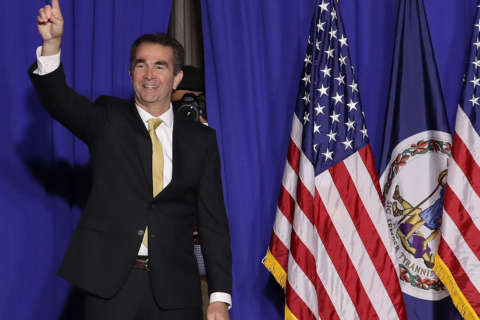 Northam calls for unity in Virginia after his victory