Up to three World Series games, the Marine Corps Marathon on Sunday and a variety of ongoing major construction projects across the region could pose challenges for anyone trying to get around this weekend.
Listen now to WTOP News WTOP.com | Alexa | Google Home | WTOP App | 103.5 FM

Up to three World Series games, the Marine Corps Marathon on Sunday and a variety of ongoing major construction projects across the region could pose challenges for anyone trying to get around this weekend.

For the World Series, D.C. has expanded parking restrictions and street closures around Nationals Park beyond regular-season games to account for potential additional crowds watching the game in the neighborhood and any security concerns.

Due to the events, Metro has no planned single-tracking or shutdowns and expects to provide additional service before and after the marathon and World Series games.

If Game 3 or Game 4 of the World Series at Nationals Park go beyond Metro’s closing time, the rail system would keep running for people leaving the Navy Yard-Ballpark area until about 20 minutes after the final out.

Last trains on Fridays and Saturdays come around 12:52 a.m. toward Greenbelt and 1:18 a.m. toward Branch Avenue.

If the Nationals do not sweep the series, and a Game 5 is required Sunday, Metro plans to also stay open until 1 a.m. systemwide. Pepco is sponsoring the two hours of additional service on Sunday night if it is needed; and Metro would still continue to run from the Navy Yard-Ballpark Station 20 minutes after the final out if the game goes later than that, General Manager Paul Wiedefeld said Thursday.

Maryland’s MARC Train is also offering special postgame service for each game between the Washington Nationals and Houston Astros, with a Penn Line drain departing Union Station an hour after the last out of each game, making all stops to Baltimore Penn Station.

Metro had already been set to open two hours earlier than usual on Sunday for the Marine Corps Marathon. The marathon is paying for the 6 a.m. opening. Metro will also run extra Blue and Yellow Line trains before and after the race.

Pentagon is the closest station to the marathon start line, but Pentagon City is in the vicinity, as well. Arlington Cemetery Station is scheduled to be closed until about 8:30 a.m. Sunday.

The MCM 10K starts on the National Mall not far from the Archives and L’Enfant Plaza stations.

Because of the race and associated events, buses that usually run to and from Pentagon will instead run to Pentagon City on Saturday until 2 p.m. and on Sunday until 4 p.m.

Buses that usually stop at the Rosslyn Metro will instead stop on Oak St. from approximately 4 a.m. to 6 p.m. Sunday due to the marathon’s finish festival.

Other smaller races and events are also scheduled to close roads or draw crowds elsewhere this weekend, including Saturday morning’s Walk & 5K to End HIV that will close streets around the National Mall between the Capitol and Freedom Plaza from 8:30 a.m. to 10:30 a.m.

Street closures begin very early Sunday morning and are expected to last into early afternoon in Arlington and D.C.

The race typically snarls traffic for miles around.

You can find a complete list of road and street closures for the marathon here.

The marathon recommends runners arrive far in advance of the start time to get through security checkpoints, bag drops and find the appropriate start point.

In some areas, bicycles will not be allowed, so Arlington County police say riders may be told to either turn around or lock their bikes and walk.

There are parking restrictions this weekend all along the marathon course and in areas around Nationals Park, so check signs carefully if you do decide to drive. 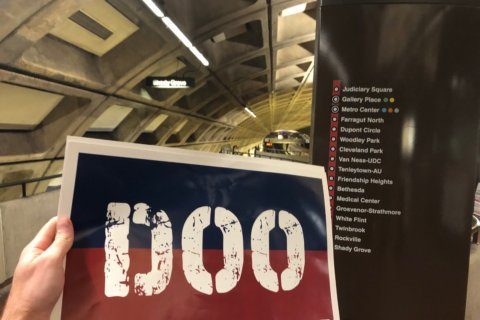