Metro is optimistic — but not totally certain — that regular service on the Blue and Yellow lines will resume Sept. 9.

During a tour Thursday of the construction zone at the Van Dorn Street station, Metro General Manager Paul Wiedefeld said the transit system and its contractor are still “in pretty good shape” to reopen all six stations south of Reagan National Airport in a month without any need for additional single-tracking delays at Van Dorn Street.

“I say that not knowing what the weather’s going to bring tomorrow,” Wiedefeld said.

Metro is reluctant to clearly say there will be none of the originally planned additional rush hour single-tracking until the agency is completely confident there are no surprises when power is flipped back on over the next few weeks.

Crews at Van Dorn Street did not need to fully replace platform edges on one side of the station, and the initial plan for continued work there was also before Metro extended the shutdown by a week to account for additional work at Braddock Road.

Wiedefeld said the platforms are now safe. Many of the edges had been propped up with temporary scaffolding for years.

Determining whether all of the work needed will be done in time to run regular rail service on Sept. 9 comes down to avoiding big storms and to positive results of weeks of testing that is about to begin, said Laura Mason, Metro chief of rail infrastructure, maintenance and engineering.

The testing sequence includes bringing power back one area at a time, testing each panel and system, then testing everything together from train movements, to fire alarm, public address and communications systems.

Some testing is underway now using temporary power, but Metro plans to begin returning permanent power to parts of the stations and tracks next week. Test trains could then begin moving around parts of the shutdown area after that.

At Huntington, Metro is also building the beginnings of a new entrance to replace the one in an essentially condemned garage.

“There’s a lot of scope out here beyond just what the passengers will see, but all of it is making their ride safer, more reliable,” Mason said.

About 800 people are working on the construction, shuttle buses and other parts of the project during a typical day, Mason said. Crews are generally working staggered six-day weeks, and there are more workers there during the day than overnight.

Other work is expected to continue after stations reopen, such as the installation of new bus stop shelters, mezzanine repairs and lengthy additional platform work at Huntington and Franconia-Springfield stations. That work will not disrupt rail service, Wiedefeld said.

Wiedefeld knows the best part for riders “is going to be the train showing up when it’s supposed to show up.”

One thing that has not been done is key prep work for the new Potomac Yard station that is due to be built between Braddock Road and Reagan National.

“They were delayed with some permit issues, but we should have them working here shortly in the next few days, and we’ll try to get as much of that work as we can done during this outage to minimize what has to happen after we come back to service,” Mason said.

Now, she expects a cable trough and duct banks under the Metro tracks to be installed, each of which would normally require a shutdown to accomplish.

At an Alexandria Potomac Yard Metrorail Implementation Work Group Meeting on Monday, Metro said it did not get the amount of work done this summer that it had hoped, but also said that the original station construction schedule did not include the potential benefits of the shutdown either.

Metro had hoped to start the installation of cable troughs and an AC switchgear building earlier in the shutdown if possible, but designs and environmental plans were not developed enough until recently to allow for construction to begin.

The station itself is just off the current Metro tracks, so most of the main construction work over the next few years can be done without Blue and Yellow Line closures, Mason said. The latest schedule projects construction starting soon on the AC switchgear building, with fill for the station starting to go in next month. Construction could begin this fall. 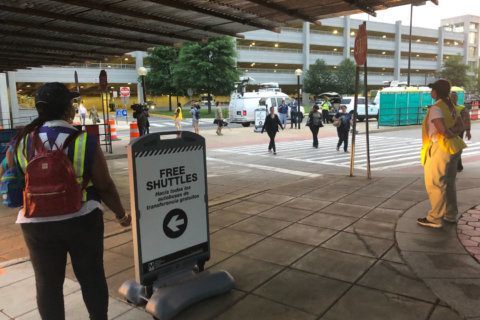 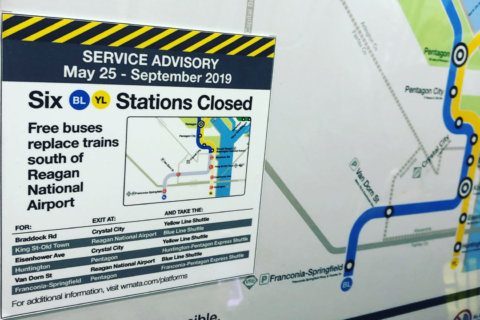