As Virginia Tech finalized the location of a new campus Monday near the future Potomac Yard Metro station, Alexandria officials are still trying to figure out whether the station will have the two entrances originally promised.
Listen now to WTOP News WTOP.com | Alexa | Google Home | WTOP App | 103.5 FM

As Virginia Tech finalized the location of a new campus Monday near the future Potomac Yard Metro station, Alexandria officials are still trying to figure out whether the station will have the two entrances originally promised.

While the state government promised $50 million to restore a second entrance that was controversially dropped from plans, recent cost estimates put even the price of a bridge from the south end of the station to the currently planned northern entrance at $75 million.

The contractor building the station estimates it would charge $90 million for an entrance ramp with a moving walkway to the north entrance, or $100 million for an actual second entrance with a small mezzanine to allow riders to enter and exit the station from both ends of the platform.

In an update from the city manager ahead of an advisory group meeting Monday night, the city said adding the true second entrance to the platform could also delay the opening of the station by up to a year. The other options could delay the opening up to six months.

Even without any southwest entrance, the station is expected to cost $320 million after budget increases approved last year. That includes $25 million for a much shorter ramp from the northern entrance toward E. Glebe Road that was originally projected to cost $15 million.

The newly finalized 15-acre Virginia Tech Innovation Campus will be at the north end of the station, just south of Four Mile Run where the Potomac Yard shopping center is Monday. That is a shift from the original idea to put the campus a few blocks south of there.

The Potomac Yard Metro Station will be between the Braddock Road and Reagan National Airport stations on the Blue and Yellow lines.

Any costs beyond $370 million ($320 million plus the $50 million from the state) would require additional money from city taxpayers.

The city and Metro are set to ask the contractor to come up with cheaper ways to build the cheapest alternative — the bridge from outside the south end of the station to the northern entrance — that could lead to something close to the $50 million budget from the state and something that would not significantly delay the station’s opening.

The changes could eliminate escalators at the additional entrance, among other features.

The proposals are set to be discussed Monday night at the Potomac Yard Metro Implementation Group, then June 22 at a public hearing before the City Council. The council could vote to support the recommendation for the redesigned bridge at a meeting June 25.

A new design for that entrance option and more finalized price could be set by the fall.

For now, work is underway using the current designs and construction plans.

Some initial preparations are being done during the complete shutdown of the Blue and Yellow lines south of Reagan National Airport that began last month and continues into September.

A construction office is being set up now, and a work bridge over the Metro tracks is due to be completed next month.

Crews are also working on an electrical building that will be needed as part of the station project, as well as other utility changes this summer.

By early fall, the contractor plans to place the fill for the future station site. 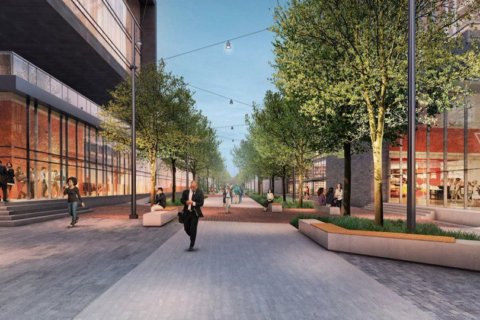