Metro work limited, but trains won’t get you to cherry blossom race start

Metro opens at 8 a.m. on Sundays — too late for runners who are trying to get to the starting line. A number of Metrobus routes, however, do serve the area that early. Runners will be able to take Metro trains home.
Listen now to WTOP News WTOP.com | Alexa | Google Home | WTOP App | 103.5 FM

Metro plans largely regular service this weekend, which will be the third of four weekends with extremely limited track work due to expected cherry blossom crowds.

The system will run regular hours, though — which means runners participating in Sunday’s Credit Union Cherry Blossom Ten Mile Run and 5K Run-Walk will not be able to take the train to the start lines.

“Due to exorbitant fees being charged by Metro and shortened hours for early opening on race day (please express your displeasure directly to WMATA), Metro service will not be available on race day,” race officials told runners in a statement.

Metro generally charges a $100,000 deposit now for each additional hour of service in an effort to cover more of its costs. Metro cut back operating hours to open at 8 a.m. on Sundays in 2017, so providing enough extra service to get runners to the start line would probably require at least two additional hours.

A number of Metrobus routes, however, do serve the area that early. Runners will be able to take Metro trains home.

The race begins near the Washington Monument, and will have a bike valet for runners who pedal to the start line.

Most road closures for the race are scheduled to begin around 7 a.m. Sunday. The race goes from 15th Street near the Washington Monument, up Independence Avenue past the Lincoln Memorial to Rock Creek Parkway, before looping back down the Potomac River Freeway to return past the Lincoln Memorial down Ohio Drive, then back along Independence Avenue to loop around Hains Point and past the Jefferson Memorial.

Cherry blossom crowds and the races are not the only delays expected on the roads across the region, with construction season and related lane closures ramping up.

There are also other events around the region Saturday, including the Cherry Blossom Festival fireworks Saturday night as part of activities in and around The Wharf.

Even with the break from major weekend track work through the end of the National Cherry Blossom Festival and the annual parade next weekend, Metro has some late-night single-tracking planned. 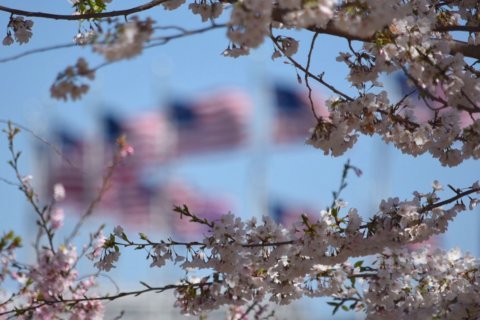