Editor’s note: On Tuesday, Aug. 16, Metro announced changes to its track work plan and added series of weekend shutdowns. This extended the the currently scheduled track maintenance on the Red Line to Friday, Aug. 19, and has shifted the schedule for round-the-clock single tracking on multiple lines on the rail system. Work on the Blue Line that was originally scheduled to begin Saturday will be pushed back to Aug. 27. Single-tracking between the Franconia-Springfield and Van Dorn Street stations is now scheduled to last through Sept. 11. Find a full list of the changes here.

WASHINGTON — Metro’s round-the-clock track work shifts to the west side of the Red Line from Aug. 9-19, in a work zone that is scheduled to both start and end in the middle of the week.

Metro expects this work zone to have a less sweeping impact than the Aug. 1-7 work near Silver Spring that reduced service along nearly the entire Red Line.

But the latest round of work will have a very significant impact on riders who use the Shady Grove or Rockville stations.

Trains will share one track for 10 days between Shady Grove and Twinbrook as crews work to repair and replace rails, crossties, power systems and other key pieces.

Even at rush hour, trains are only scheduled to run every 18 minutes to or from Shady Grove and Rockville. That means about two out of every three usually scheduled trains will not run there.

Other trains will turn back at Twinbrook, which Metro expects will provide all other Red Line stations with “near-normal service.”

The single-tracking means riders who use the Shady Grove and Rockville stations during the work should expect significantly longer waits and potentially even more crowded trains than usual.

For Red Line riders farther down the line who can afford a few extra minutes, it may make sense to allow a more crowded train going to or from Shady Grove to pass by and wait for a less crowded train that is running to or from Twinbrook. The trains ending at Twinbrook are in addition to the usual trains that turn back at Grosvenor-Strathmore.

Riders who stick with Metro should consider using the Twinbrook, White Flint or Grosvenor stations instead of Rockville or Shady Grove. Riders who live between the two branches of the Red Line might also consider using Glenmont, Wheaton, Forest Glen or Silver Spring.

For those who usually drive to Shady Grove or Rockville, the parking garage at Twinbrook typically has about 400 open spaces at rush hour; White Flint’s has about 100; Glenmont’s has about 425, and Wheaton’s has about 650. Since this work zone happens in August, some lots may have more spaces than usual.

Montgomery County’s Ride On bus service is running free rush-hour shuttles every 10 minutes between Shady Grove and Grosvenor-Strathmore. Metrobus and Ride On are adding additional service to regular bus routes that run along or connect to the 270 corridor.

Metrobus Q routes along Viers Mill Road between Shady Grove and Rockville and Wheaton, Forest Glen and Silver Spring will have additional trips to connect riders to the east side of the Red Line.

Metro riders typically dropped off at White Flint may also consider going to Grosvenor-Strathmore instead, to take advantage of the trains that begin service there back toward D.C.

Riders who typically are dropped off or take a bus to Shady Grove might also consider biking to Twinbrook. The six-mile southbound ride is largely downhill, and could take 30 to 45 minutes. While there are Capital BikeShare stations at Shady Grove and Rockville, there are no docks in the Twinbrook area, so the option is likely only useful for those who own their own bikes.

MTA Commuter Bus is adding additional late runs to Frederick and Hagerstown for riders who may miss their regular buses because of Metro delays.

After this work zone ends on Friday, Aug. 19, there is a one-day break before work shifts back to the Blue Line.

The work from Sat. Aug. 20 to Labor Day, Mon. Sept. 5, will significantly reduce service between Franconia-Springfield and King Street.

Metro plans to run additional Yellow Line trains to and from Huntington in place of the “rush-plus” trains that typically run to and from Franconia-Springfield.

The work on the tracks means trains will single-track between Van Dorn Street and Franconia-Springfield.

Because there is no rush-plus Yellow Line service, riders between Van Dorn Street and King Street will still see only half as many trains as usual at rush hour.

Stations north of King Street are scheduled to have a regular level of service.

There is no scheduled rush-hour track work on the first few days after that work zone wraps up, with all major area school systems back in session.

The next work zone begins the Friday of Labor Day week, Sept. 9. That is the start of six continuous weeks of single-tracking on the Orange Line between Vienna and West Falls Church. The work will mean Orange Line riders who use Vienna or Dunn Loring will need to consider using other stations or options from Sept. 9 to Oct. 20.

Before that work zone ends, what is expected to be the most significant disruption on the entire track work calendar begins Oct. 10.

From Oct. 10 to Nov. 1, the Red Line is scheduled to completely shut down for 23 days between Fort Totten and NoMa-Gallaudet.

During that work, the Brookland-CUA and Rhode Island Avenue stations will be closed, and there will also be significant cuts to regularly scheduled train service along nearly the entire Red Line. Train service between Silver Spring and Fort Totten is scheduled to be cut by 70 percent at rush hour, while service between Grosvenor and NoMa-Gallaudet and between Silver Spring and Glenmont is scheduled to be cut by 40 percent. 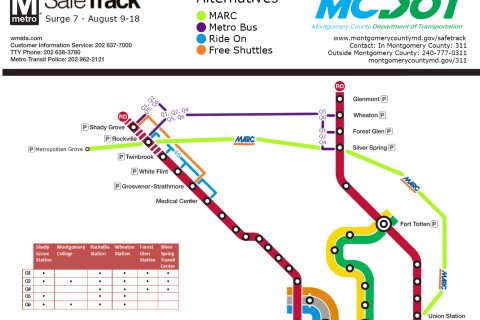 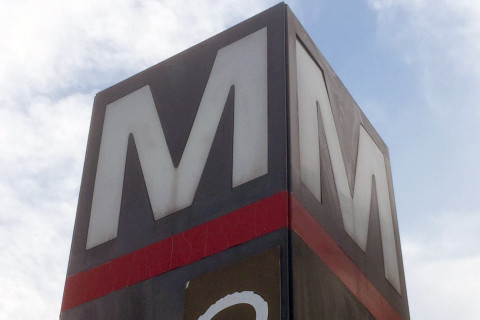