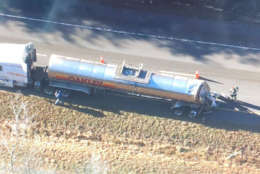 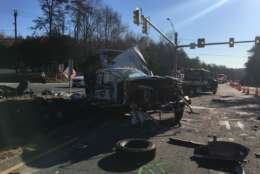 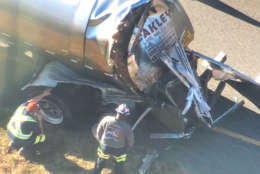 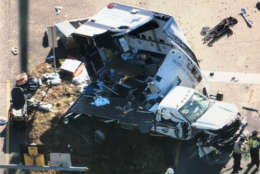 WASHINGTON — A tanker truck collided with a private ambulance on northbound Route 17 near Hartwood Road in Stafford County, Virginia, sending four people on the ambulance to the hospital Tuesday morning.

The crash that flipped the ambulance on its side occurred around 7 a.m., according to Stafford County Sheriff spokeswoman Amanda Vicinanzo.

One patient and three crew members on board the ambulance went to the hospital, Vicinanzo said. The sheriff’s office said that their condition is known, but aren’t releasing information about it at this time.

The driver of the tanker truck was uninjured. The truck was carrying cranberry juice, the sheriff’s office said.

The crash caused closures on the roadway; lanes were reopened around 11 a.m. The investigation to determine the cause of the accident is ongoing. Charges are also pending.

Here’s something you don’t see every day: An ambulance with a patient on board gets entire roof and sides ripped off in collison with 18 wheeler tanker truck #breakingnews in #Stafford #vatraffic @nbcwashington @First4Traffic pic.twitter.com/0expOndcU1

WTOP’s Teta Alim and Joslyn Chesson contributed to this report.