Healthy and fit at a glance, an Invictus athlete talks about invisible disabilities

Heather Wright is one of 65 disabled U.S. veterans competing in the Invictus Games this week, which features competition among disabled veterans from around the world, but her disabilities may not be as visible as others.
Listen now to WTOP News WTOP.com | Alexa | Google Home | WTOP App | 103.5 FM
(1/4) 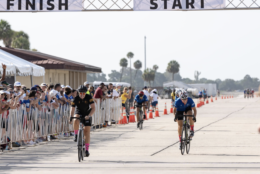 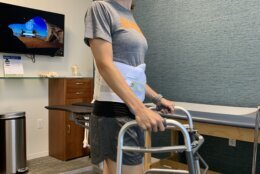 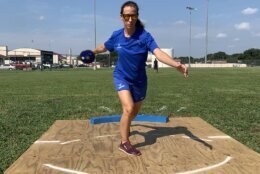 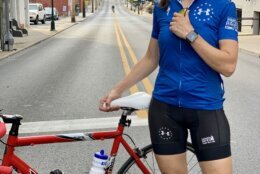 At first glance, you assume Heather Wright is an athlete — there’s strength in the 38-year-old’s handshake. So on the surface, it might not make sense that she’s competing in the Invictus Games for wounded servicemen and women.

Wright will be biking, swimming and discus throwing in the games, which kicked off over the weekend in the Netherlands.

“Sometimes we think we can see disabilities and that’s not always the case,” said Wright, who is from the Martinsburg/Charles Town area of West Virginia.

It’s one reason why, after years of battling back issues — so bad she was described as having “the back of an 80-year-old” — she’s speaking out about the issues people can’t see, and might not even notice unless her body betrays her during the competition.

In fact, it happened once before during a cycling race featuring other elite, able-bodied cyclists striving to “go pro.” The moment still drives her.

Her injury list is fairly extensive for someone her age. When she was 22 and serving overseas in the Air Force, she hurt her back. Wright went through lots of treatment for two herniated disks, with her most recent surgery for a lumbar fusion back in December.

“She’ll crush you in the gym,” said Dr. Christopher Good, who performed the surgery at the Virginia Spine Institute.

But it’s not just her back, and all the pain it has put her through for years, that tried to slow her down. She’s also started speaking out about the other ailments hampering her in the last couple of weeks leading up to the games.

“I have [an] autoimmune disease and it infects my neurological system,” said Wright. “It impacts my vision in both eyes, actually. It impacts my strength, primarily on my left side — kind of some spasticity, so like muscular contractions. Maybe they just aren’t there to work for me when I call on them, which can be very challenging in sports and athletics.”

She also suffers from a respiratory disease that came about after chlorine exposure while she was in the service.

“It’s very important to me to start speaking about kind of invisible disabilities,” said Wright. “I’ve used the phrase that it’s not the universal symbol of a wheelchair, and I mean nothing against people who are in a wheelchair. Some of my teammates are.

“Just because people look healthy, they could have a lot going on,” Wright said, using her hands to add air quotes around the word “healthy.”

Wright is one of 65 disabled U.S. veterans competing in the Invictus Games this week, which features competition among disabled veterans from around the world.

“Her fighting spirit is part of why she’s coming through back surgery,” said Dr. Good. “Nothing can stop her at this point.”

Coming home with a medal in any of the events she’s competing in would be a thrill, and probably drive her to tears, she admitted. But it’s also not the goal.

“At the end of the day it’s about supporting one another, it’s about resilience, it’s about showcasing that we’ve persevered through whatever these injuries or illnesses are,” said Wright.

“You’ll see people with multiple amputations and people missing eyes and some stuff is invisible. Some of our teammates have cancer or have a neurological disease, and lots of that stuff we do and don’t talk about, but really just carry one another’s burdens at the end of the day and facing it as a team.”