The ‘Redhawks’ made you look, now you should listen

Should Washington's football team change its name? Doing so would be the decent thing to do.
Listen now to WTOP News WTOP.com | Alexa | Google Home | WTOP App | 103.5 FM

WASHINGTON – Yeah, I know, you’ve heard all this before.

That question – what’s new – depends on how much attention you’ve paid the other times the name change has been discussed. As someone who has covered the ongoing saga since coming to WTOP in the spring of 2014, I thought I knew all the pertinent facts. I was wrong.

Last week, a website launched, announcing that the professional football team in Landover would be changing its name to the Washington Redhawks next season. An accompanying Twitter account popped up Wednesday morning to announce the news, complete with a new Burgundy and Gold logo. 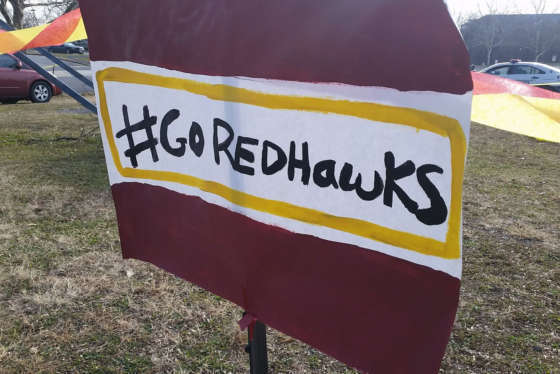 Native American activists have reignited the debate over changing the Washington Redskins football team name. On Sunday, they rallied outside the FedEx field in Landover, Maryland.

Except, of course, that’s not actually happening. The project was an elaborate hoax by Washington-based Native group Rising Hearts, which successfully generated new attention for the name change debate, which has cooled off as the team finally abandoned its ill-conceived propaganda campaign almost exactly two years ago. To be clear — Redhawks was simply a suggestion, proof of how easy, seamless and painless a name change would be.

Before protesting outside the game Sunday, Rising Hearts held a press conference Thursday, on a traffic island in front of the George Preston Marshall Memorial outside RFK Stadium. One piece of their message stood out to me in particular. Do you actually know what “Redskin” means? Are you sure? I’m going to share it with you and, especially if you consider yourself a fan of the team, you should really listen.

This was the section of a written statement from Suzan Shown Harjo — president of the Morning Star Institute, who filed the original case with the U.S. Patent & Trademark office in 1992 — which was read aloud Thursday that really stuck with me, regarding the name.

“It refers to the practice of skinning Native people, a tradition started in the centuries when companies, colonies, territories and states issued bounty proclamations for dead Indians.”

Maybe you knew that. But wait, it gets worse.

“In order to collect the blood money, bounty-hunters had to produce ‘proof of Indian kill’ – either the whole bodies or skins or ‘scalps’ (a genteel way of saying genitalia), which were the only ways to prove the gender or age of a dead Native person.”

Can you see, perhaps, why that might be offensive? Why it’s a particularly detestable slur? Might it make you think twice about wearing that name across your chest, or giving your kids a jersey with that word on it this holiday season? Might it change the way you casually toss the name around, chatting with coworkers or friends?

Whether or not you think the team must change its name, it is inarguable that it would be more decent to dump it than keep it. Clearly, some people find it offensive, and now you really know why. Not using it anymore would be understandably meaningful to them. And if America owes any of its minority groups that does not have a strong voice an open ear, it owes it to Native Americans.

Native issues are only given passing lip service most of the time due to their lack of representation in American society. Making up only about two percent of the population, on their own, without advocates outside their own community, their issues often fall on deaf ears.

“As Native people, we live in this very restrictive box of invisibility,” said Rebecca Nagle, one of the organizers and a citizen of Cherokee Nation. “So it is very, very, very rare for the issues that are affecting Indian country to break into the mainstream news and to be part of the news cycle.”

That’s why Rising Hearts created the Washington Redhawks site, which it turns out, was an operation months in the making, strategically rolled out with surprising effectiveness.

The site, meant to mimic the actual NFL team sites, was topped with a fake press release, but was fully functional, including a crisp, realistic logo and links to actual team site pages. It also included four, elaborately constructed facsimiles of stories purportedly by The Washington Post, Sports Illustrated, ESPN and Bleacher Report, all convincing enough to potentially fool users who scanned them too quickly.

In perhaps the most deft touch of the entire project, in the fake press release, the site used Dan Snyder’s own, real quote from 2013 that he used to defend the team name at the time to purportedly support the Redhawks moniker. It served to drive home what it would look like if this entire debacle was actually handled with respect. In a world that has become so thoroughly cynical, to where the lines between reality and parody are entirely blurred on a daily basis, it reinforced that the only effective satire anymore is no longer presenting a warped shade of reality stretched to its extreme, but rather one that shows us the simpler, better society in which we ought to be living.

In that way, the project elicited perhaps the most fitting possible response from the team itself. Any project like this one is looking for attention, particularly from its primary target, and WashingtonRedhawks.com achieved exactly that. By admitting that it saw a good idea, rejected it, and reiterated its commitment to its own disastrous nickname, the team gave WashingtonRedhawks.com and its creators more than they could have ever hoped for.

Statement from the Washington #Redskins pic.twitter.com/u3DQJFiFXi

If you didn’t care about the name, you probably saw this as more of the same — nothing to see here. If you already thought the team should change the name, this only reinforced the club’s stubborn, insistent tone-deafness. But if you look at it in light of what you’ve read up to this point, the entire name change resistance comes across as staggeringly, needlessly cruel.

Now you’ve listened. Will the NFL?