Fighting all kinds of adversity, the Washington Spirit is on a roll and ready to make an improbable run through the National Women's Soccer League playoffs.
Listen now to WTOP News WTOP.com | Alexa | Google Home | WTOP App | 103.5 FM

Fighting all kinds of adversity, the Washington Spirit is on a roll and ready to make an improbable run through the National Women’s Soccer League playoffs.

Washington (11-7-6) completed its regular season with a 1-0 victory over the Houston Dash, clinching the No. 3 seed and a home playoff game at Audi Field on Sunday in the quarterfinal rounds.

The Spirit head into its first postseason appearance since 2016 on a six-game unbeaten streak and a dark horse pick to win it all.

“We are a resilient bunch,” midfielder Tori Huster told WTOP. “We have experienced a little bit of everything this season. And I’m excited though that we are about to experience playoffs and hopefully get a win.”

The late-season push came as Washington made headlines for off-the-field reasons. First, former head coach Richie Burke was suspended and ultimately fired after reports of verbal abuse and racist comments toward players.

Then, after a league investigation fired Burke “with cause” and fined the team for reports of a hostile work environment, fans began protesting in the stands, calling for majority owner Steve Baldwin to sell his ownership stake in the team.

Spirit players decided to join calls for Baldwin to sell the club to minority owner Y. Michele Kang on the same week the NWSL was rocked by sexual harassment and misconduct allegations involving longtime coach Paul Riley as well.

Along with all the management issues, Washington forfeited two matches for breaking COVID-19 protocols.

While such hardship would derail a season, Washington’s players used it as fuel for their play. In their final six matches, the Spirit outscored their opponents 10-2 while collecting four shutouts. Aside from the two forfeits, Washington has not lost a game since the coaching change.

“I think the field itself, training, games, we have managed to insulate ourselves enough where we have protected the sanctity of training and games to the point where it can remain an escape or just a place that we can play free,” Huster said. 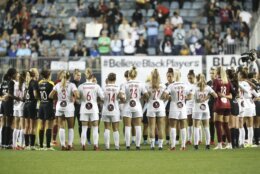 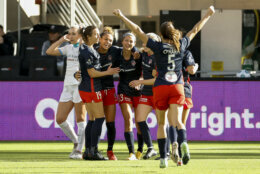 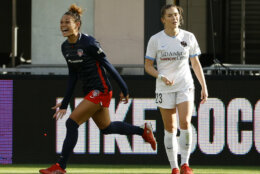 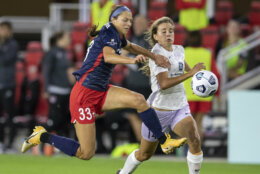 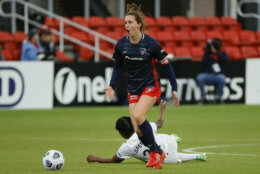 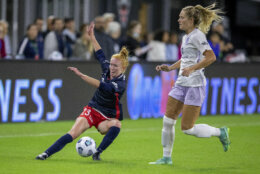 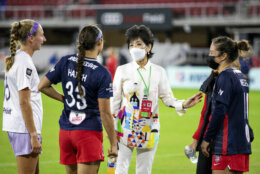 All season, the Spirit’s trio of attackers, Ashley Hatch, Ashley Sanchez and Trinity Rodman, dominated offensively. The unit combined for 20 of the team’s 29 goals this season.

Hatch made history, becoming the first player in NWSL history to score in the double digits, knocking in 10 goals, and being awarded the Golden Boot for the league’s top scorer.

Meanwhile, Sanchez, a UCLA product, is known for the flair in her style of play that catches opposing defenders off guard.

Rodman, the daughter of former NBA star Dennis Rodman, completed her rookie season scoring six goals, including the game-winner against Houston, and collecting a team-high six assists. She was named to the league’s Team of the Month three times and is on the shortlist for Rookie of the Year.

“Soccer has been our outlet for everything,” Rodman said. “We’re motivated more than anything. We want to win so bad, and we will do anything to get the win.”

Washington’s midfield and defense are filled with experience. One of only seven players still with her original club since the league began in 2013, Huster took more leadership this season as team captain Andi Sullivan began receiving call-ups to the U.S. Women’s National Team.

The backline received support in the offseason with the additions of USWNT stars Kelley O’Hara and Emily Sonnett.

Along with established players on defense, such as Sam Staab and Paige Nielsen and goalkeeper Aubrey Bledsoe making 68 saves, the Spirit finished the season with eight shutouts. However, Huster said she believes they can do even better.

“We can lock it down even more than that,” Huster said. “Be hard to beat, be hard to play against, and I think we’re in a great spot though. Headed into the playoffs, this is exactly where I would want us to be.”

The Spirit enters the playoffs as an underdog, taking on the reigning league champions, the North Carolina Courage.

Based out of Cary, the Courage has dominated the NWSL since 2017, winning three straight NWSL Shields for the best team in the regular season and capturing the NWSL Championship two times.

However, this season, Washington has defeated North Carolina twice and earned a draw in three games. Interim head coach Kris Ward said North Carolina “took it to them” when the Spirit won on the road 2-1 on Oct. 13, and home support will be critical in their upcoming affair.

The winner of Sunday’s quarterfinal heads to the Pacific Northwest to play No. 2 seed OL Reign in Takoma, Washington, in the semifinals with a ticket to the championship game at stake.

That is why Huster is calling for all of the D.C. region to head down to Buzzard Point Sunday, adding that everyone is welcome to join the bandwagon, “the more, the merrier.”

“We need fans more than more now than we ever have before. And it’s so energizing to have Audi [Field] filled, other stadiums filled, whether they’re cheering for us or not,” Huster said. “It really makes it feel like it’s a professional stage, and that’s exactly what my teammates and I deserve. 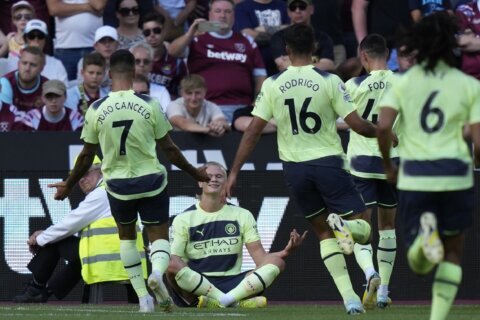