A Manassas mother has joined 11 other Virginia parents in a lawsuit to stop the implementation of a new state law making masks optional in Virginia public schools and roll back new mask-optional policies in area public schools.

Now, the 12 parents and the ACLU have amended their suit in U.S. District Court for the Western District of Virginia, seeking an injunction against S.B. 739 and claiming that it strips school divisions of their ability to meet obligations to students with disabilities under the Americans with Disabilities Act. A virtual hearing on the injunction request is set for March 7.

“Defendants, via both Executive Order 2 and S.B. 739, are discriminating against students with disabilities in violation of federal law; Plaintiffs are likely to suffer irreparable harm in the absence of preliminary relief,” the new motion, filed on Tuesday, reads.

One of the 12 plaintiffs is Tasha Nelson, the mother of a 10-year-old student at Jennie Dean Elementary School in Manassas. Jack, Nelson’s son, suffers from cystic fibrosis, a condition that can hinder breathing and make patients particularly susceptible to lung infections.

Nelson says that because of his condition, her son – referred to in the suit as J.N. – is at high risk of severe illness from COVID-19.

“If there is no longer a mask mandate in Manassas City Public Schools, J.N.’s parents will have to choose between sending J.N. to school, which puts J.N.’s health and safety at heightened risk, or withdrawing him from school and risking his educational progress.”

On Feb. 16, hours after Youngkin signed S.B. 739 into law, the Manassas school division announced that maskless students would be welcomed into classrooms without any additional mitigation efforts like separation.

According to Nelson, she and Jack were in the car when they heard about the new law last Wednesday.

“He turns to me and he had these big tears in his eyes, and he said ‘Mom, does that mean I can’t go to school?’” Nelson told InsideNoVa. “He asked me if there was a way to let the governor know about kids like him.”

Nelson says that she’s tried to work with the Dean Elementary and city school officials to find a workaround for Jack, by either distancing him from unmasked students or having everyone in his class wear masks. But as of March 1, MCPS and other school divisions will be bound by state law to welcome maskless students without additional mitigation strategies. Nelson says that Jack’s doctors have said he should only be in school while there’s high community transmission if everyone is masked.

Per the Centers for Disease Control, high transmission is more than 100 new cases per 100,000 people reported over a seven-day period. Cases have fallen significantly in Manassas and across the region, but the city still reported over 200 new cases per 100,000 people in the last week. Cystic fibrosis patients have been particularly susceptible to severe COVID cases, with a recent National Institutes of Health study finding that over 10% of CF patients require critical care within a month of a COVID diagnosis, though it was conducted prior to the rollout of vaccines.

“I go solely on the advice of his specialists. His disease is rare and complex and requires a great deal of knowledge and care, and so his whole life everything we’ve done regarding his health has been at the advice and recommendation of a doctor who specializes in cystic fibrosis and pulmonary,” Nelson said.

For now, Jack is staying home, with Tasha getting assignments from the school for him to complete, as if he himself had tested positive for COVID. But that’s forced Tasha to miss work as Jack misses the specialized instructional help he received in school for his learning disability.

“This situation is devastating [Jack]., who cries daily when his siblings are dropped off at school and he cannot go. [He] feels isolated, ostracized, and discriminated against, and is having feelings of regret, and even shame, about his disease,” the motion reads.

At a ceremonial signing of S.B. 739 last week, Youngkin said he was giving parents a say in their child’s education again and that the mask-optional policy would be a step in Virginia’s return to normalcy after the COVID-19 pandemic.

Since mid-January and the height of the Omicron variant surge, COVID cases and hospitalizations across the state and country have fallen fast. And in signing S.B. 739, Youngkin delivered on a campaign promise to end mask mandates in Virginia’s schools. Groups of parents across Northern Virginia have also organized to pressure school divisions to lift the mask requirements.

But for the 12 parents in the lawsuit and other parents of children who may be particularly vulnerable to COVID-19, the drop in cases isn’t enough. Nelson insists that the lawsuit is not intended to restore blanket mask mandates across Virginia’s public schools. She told InsideNoVa that she simply wants divisions to have more flexibility to create strategies to fully protect students like Jack while they’re in school. 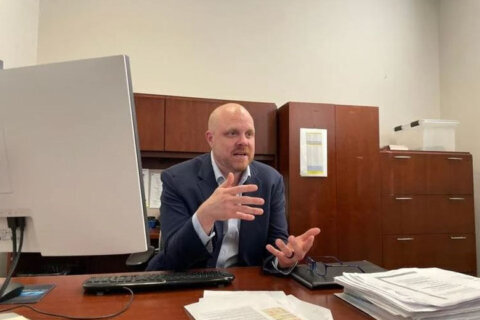