By 5:30 a.m., Fran Denicola of Woodbridge, Virginia, was obviously tired, exasperated, and at times still shaking when talking about the problems she had getting her daughter’s flight home from Florida rebooked.

“It should have never been this catastrophic, never,” Denicola said after she had just finished talking with a rep from Southwest Airlines at Reagan National Airport.

Denicola’s 15-year-old daughter is in the Tampa area for spring break with some friends. She said her daughter was supposed to fly home Thursday, but when the FAA grounded Boeing 737 Max 8 jets, that meant her flight was canceled.

Both Denicola and her daughter struggled to get any help online or over the phone. She says they both got cut off by the automated system after waiting for two hours to figure out how to rebook.

But it was when Denicola’s daughter went to the Southwest gate at the airport in Tampa that things got really bad.

“Instead of them booking her on another near flight,” said Denicola, “they waylaid her all the way til March 21. To come back seven days later … she’s only 15 years old.”

A quick look on Southwest’s website showed a number of flights leaving Tampa for Reagan National Airport on Thursday, and while some were sold out, others were not.

The good news is that Denicola was able to get some help from Southwest agents stationed at Reagan National and her daughter will be flying home Friday.

“The nice people here at DCA … thank God,” said Denicola, who also got a voucher for future tickets in the ordeal.

“But the incompetence in Tampa Bay Southwest is reprehensible. There was no reason for anybody to be that incompetent at any counter,” said Denicola. 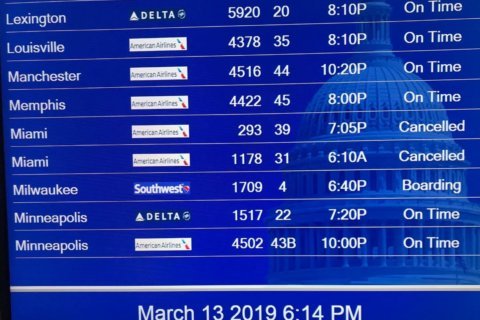 US grounding of Boeing jet shows limits of company’s clout