Holidays: 'Enchant' shines with millions of lights in Nats Park | Where to see holiday lights | Send in photos of decorations | How to give greener this season
Home » Prince William County, VA News » Trump rally in Manassas… 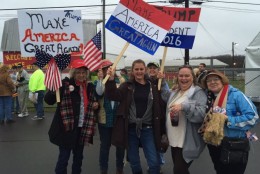 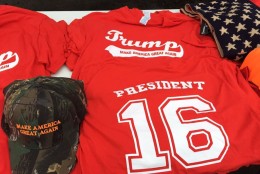 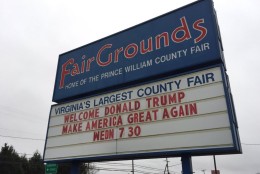 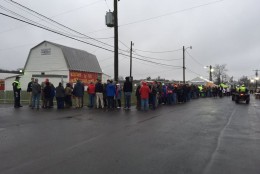 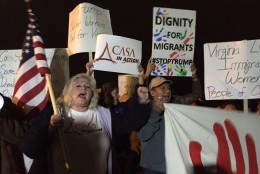 His rally at the Prince William County Fairgrounds in Manassas attracted people who both like him, and loathe him.

Scott Knuth, who has attended Trump rallies in Richmond and Norfolk, was first in line to get in.

“Mr. Trump tells it like it is, OK — where other politicians don’t want to,” he said.

“Our leader that’s in office right now, if you can call him that, and I don’t like taking stabs at him … he doesn’t want to pay attention to actually what’s going on in the world.  He’s worried about climate change, and we’ve got ISIS,” Knuth added.

Terri McCormick says she likes the fact that Trump is a businessman, and not a career politician.

“I think it would really help to have a businessman actually running the country,” she said.

She’s a conservative who is still deciding on a candidate, so she came to hear more from Trump.

“I’m concerned about terrorism.  That’s a big deal,” she said.

Juan Carlos Fierro was born in Ecuador, but has lived in the U.S. for decades.

He says he likes the part of Trump’s immigration reform proposal about building a wall on the U.S. border with Mexico, but he doesn’t think Trump’s plan to deport millions of illegal immigrants is realistic.

“It’s been a very difficult 8 years for me and my family and we’re looking for something new, and I think that Mr. Trump has a lot of potential.  Even though I don’t agree 100 percent with him in some things that he says … I think that he can bring us some change,” Fierro said.

There are about 100 protestors from groups including CASA in Action & NARAL Pro-Choice America @WTOP pic.twitter.com/yNIfvUWPW4

Also showing up at the fairgrounds were 75 to 100 protesters from several different groups.

They carried signs and chanted slogans including “Virginia is for lovers, not for haters” and “Dump Donald Trump.”

“We clearly think that he is the modern representation of a candidate that is trying to mobilize a xenophobic, racist, sexist populace into a voting bloc,” said Kim Propeack, with immigrant rights group CASA in Action.

“Trump has a history of not respecting women, and we’re here to say that it’s time to respect women’s reproductive freedom in Virginia,” said the group’s Nicole Grim.

Quantico Marine seeks to have his Jan. 6 case suspended