Another ‘first’ day of school for some Prince George’s Co. students 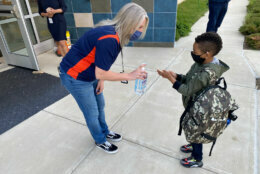 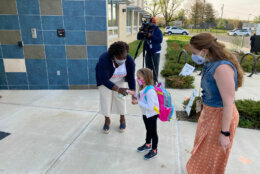 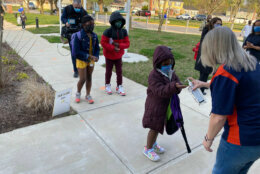 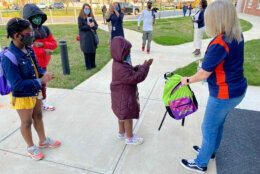 Bowie resident Christina Linton says it’s almost like having a second “first day of school” for her daughter, Mia, who will finally set foot inside Tulip Grove Elementary. Mia’s entire school experience has been on Zoom, until now.

“I even considered doing my cheesy ‘first day of school’ sign again, but was like ‘No, that’s just doing too much,” she said with a laugh.

“I don’t want to embarrass her too much.”

In what has been a strange school year, Linton says her daughter has still managed to learn how to read, even with virtual instruction — while seeing her social skills regress a bit.

But she expects a rebound when the doors open, based on what she saw at the orientation held at the school Tuesday.

“Her principal (Jaime Coffen) was at the door greeting students coming in and she (Mia) right away was like ‘Hi, Mrs. Coffen! How are you?” recounted Linton. “She kept bumping into her teachers that she’s seen on Zoom, even now in person with a mask on, and it’s ‘Oh, that’s my teacher. Hey!’ super excited.”

Mia will only be in class two days per week under the county’s hybrid learning plan, but Linton has some apprehension about how her daughter will handle the increased structure an in-classroom setting provides.

It’s a lot easier to walk away for a moment in a virtual setting and take a mental break or bathroom break. In the classroom, you can’t just turn the monitor off for a moment.

Her other big concern?

“Getting out of the door in time,” Linton said. “Because of the social distancing protocols, they have staggered start times so she has to be at school by 7:50, walking in the door.”

But that probably won’t be a problem — after all, Mia’s outfit was already picked out on Wednesday. For kids going back, there’s definitely excitement you usually don’t get in April.

Schools CEO Monica Goldson says about 30% of students will return for in-person learning beginning either today, or next Thursday, depending on what grade they’re in.  At Tulip Grove Elementary, where Goldson showed up to greet students and parents, that number is over 50%.

The minute students who made their return began approaching the school, they were greeted with smiles and hand sanitizer. There would be more of both on the inside, too.

Recess will also be somewhat different – but outside – which Goldson says will provide a nice break. For one, playground equipment used by kids will be cleaned after each group goes back in the building.

“They won’t have the ability to do things that they used to do, maybe tackling each other, etcetera,” Goldson said. “But they will have toys outside. Balls, etcetera, that they can use. Jump ropes if they decide they want to use that.”

Inside the classroom, “the desks are set up in tripods,” at least in Linton’s daughter’s kindergarten class.  “My understanding is cohort A will sit at one desk, cohort B will sit at another, the desks were labeled, and then there’s a third desk which allows for the teacher to sit and work with a student one-on-one when necessary and still allow for social distancing.”

Right now, students returning to classrooms will get two days a week of in-person instruction, either Monday and Tuesday or Thursday and Friday, with all students doing virtual learning at home on Wednesdays.  The students who are back in the classroom two days a week now can choose to opt back out and go virtual again – but anyone who hasn’t opted back in yet will not be allowed to return again until the fall.  Goldson is hopeful that kids will be back five days a week again in the fall.

“This is the first time we’re all beginning the process of in-person learning under a pandemic,” said Goldson. “But I am confident that our staff, as well as our central office support, are going to work together to insure it’s safe for everyone to attend.”