Coronavirus News: Fairfax Co. votes to increase substitute teacher pay | Is it time to get a COVID-19 booster? Which one? | Local cases of COVID-19 | How many in DC region are vaccinated?
Home » Prince George's County, MD News » Science of beer gets…

Science of beer gets boost in Hyattsville

Matt Humbard, who heads up Hyattsville-based Patent Brewing Company, is a trained microbiologist, and he puts that training to work for himself, as well as helping others make better beer.
Listen now to WTOP News WTOP.com | Alexa | Google Home | WTOP App | 103.5 FM
(1/3) 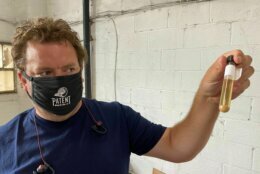 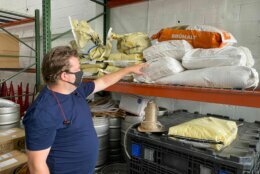 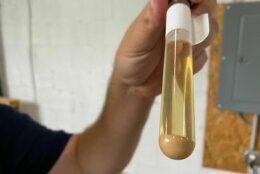 A brick industrial building in Hyattsville, Maryland, is not where you’d expect to find a science lab. But this one fits right into the culture it’s working to enhance: brewing.

Laboratories aren’t unique to Matt Humbard, who heads up Hyattsville-based Patent Brewing Company. He’s a trained microbiologist whose full-time job has him working on the federal response to the coronavirus pandemic.

The demands and the safety restrictions resulting from the pandemic put on pause Humbard’s plans to open up a brewery and tap room to sell Patent on-site. But his expertise helps him to play around with different yeasts, which he sells to other breweries around the region, and now the lab will allow him to take things a step even further.

“Any large brewery or alcohol production facility will have an on-staff scientist, or several on-staff scientists, to ensure that their process is consistent and of high quality from a manufacturing point of view,” said Humbard.

“But the majority of breweries in the United States right now are small businesses that can’t afford to have a full-time scientist on staff. We offer those services a la carte: They can just hire us out to run their yeast program or their quality assurance, quality control programs, or do other things,” he added.

Think of it as a deeper level of the collaboration that breweries are already typically known for.

“We’re sort of helping make other breweries’ beers better,” he said. “It’s not really a collaboration — we’re offering them a critical ingredient and a critical process for their product to be successful.”

If you think that sounds like Humbard is also helping his competition, he’s heard that before — and he doesn’t believe it’s a bad thing.

“To make regional Maryland beer better helps all Maryland breweries,” Humbard said. “It means Maryland beer, or craft beer as a collective brand, is that much more elevated.”

So far, he has worked with breweries from Maryland, D.C., Virginia and Pennsylvania. He also offers services, such as yeast, to home brewers.

“We offer yeasts that other yeast labs don’t, so you can get a unique product here,” Humbard said.

In addition, “when you buy yeast from us, we’re local, and so I’ll come to your brewery and help you if you have an issue. [Also], we’re cheaper,” he added.

That means breweries that want to get creative and experimental can do so with a little more financial flexibility. “Diversification (of beers) and save money, too,” Humbard said.