Three men were shot in a car Thursday afternoon, and the investigation had even closed the eastbound lanes of U.S. 50 in Prince George's County.
Listen now to WTOP News WTOP.com | Alexa | Google Home | WTOP App | 103.5 FM
(1/6) 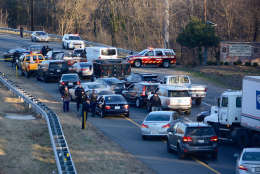 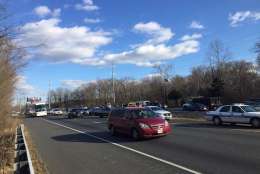 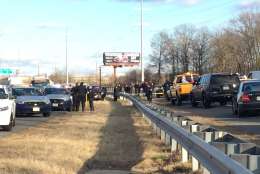 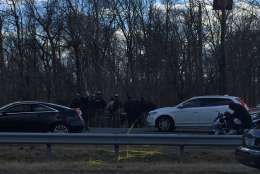 The eastbound lanes of U.S. 50 reopened shortly before 8 p.m.

Police got a call about the shooting on U.S. 50 near the off ramp to Columbia Park Road in Cheverly, Maryland, around 3 p.m. When they responded, they found three men with gunshot wounds, said Officer Tyler Hunter, a police spokesman.

Prince George’s County Fire/EMS transported the victims to an area hospital. They appear to have non-life-threatening injuries, Hunter said.

The car the victims were in at the time of the shooting was riddled with bullet holes. Broken glass and shell casings surrounded the vehicle. More shell casings were found along the road. Police even checked the tires of cars near the crime scene to see if they had driven over the casings.

The investigation had closed all lanes of eastbound U.S. 50 between Md. 201 and Columbia Park Road and all but one lane of westbound U.S. 50. All lanes reopened Thursday evening.

Police say they have no suspect description or possible motive yet in the shooting, but they did say it was not random.

Police are asking anyone with information about the case to contact them at 301-352-1200.

Officials have not released any additional details about the shooting at this time.

WTOP’s Michelle Basch contributed to this report from Cheverly.